An Introduction To Mudras 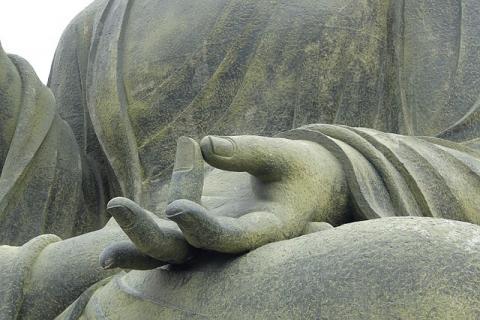 With thumb and first finger touching, hands resting gently on my knees, palms up, I tried out Chin Mudra for the first time, consciously. With curious awareness I sat on the cold stone floor of the ashram and turned my eye gaze upward toward my forehead center into Shambavi mudra. The buzz of flies and mosquitoes tried to lure me away from the inward turning of my mind. But concentration was working. Just as the swami had explained, I was finding it easier to meditate than any other attempt. This mudra changed everything. Suddenly, I glimpsed the ways in which one could more deeply access inner resources and awarenesses through the use of mudras. Here is a gentle introduction to mudras and their beautiful potency.

You may have seen depictions of Hindu or Buddhist deities with hands held in specific gestures or watched the Balinese dancers move their hands from one position into another with grace and elegance. Mudras have been a part of Eastern religions and dance for thousands of years and are known for their ability to increase one's focus and effectiveness in all endeavors, especially meditation and mindfulness.

The Sanskrit word mudra means “gesture” or “attitude” and can be applied to specific hand or body positions, which assist in focus and in increasing the circulation of pranic energy. There are several basic hand mudras that are especially powerful for beginners, including Jnana Mudra and Chin Mudra – because of their simplicity and ability to quicken results and align one with the inner state they are seeking. And then there are “more advanced” mudras, which can also be practiced by beginners, but whose effects are perhaps more subtle and easier to recognize by the more advanced practitioner.

Let's start with Jnana Mudra, the gesture of knowledge. Perhaps you have heard of Jnana yoga. It is one of the major branches of yoga – with the word Jnana meaning “intuitive self-knowledge.” The Jnana yogi is especially concerned with finding out who one really is...and the process of continued self-inquiry is the basis for the jnana yogi's practice.

Jnana mudra is especially appropriate for the beginner, as it is a symbolic act of the “initial question” taking place when one first closes their eyes to meditate. “Who am I?” “What is here?” “What am I seeking?” “What is the answer to my greatest longing?” “Who is the doer?” and on and on.

To perform this mudra, you simply place the tip of the index finger to the base of the thumb, the rest of the fingers extended in a relaxed manner. Back of the hands placed on the knees, palms facing upward.

The one who practices jnana mudra is the seeker, asking for intuitive knowledge on how to proceed. He/she is listening for the answers from within the depths and trusting the accessibility to such wisdom can be brought through one's own form.

By taking one hand in Jnana mudra up to the chest, facing outward, the mudra is changed into Vitarka Mudra, meaning the mudra of discussion. This mudra transforms inner inquiry into conversation about the all-pervading Oneness and is useful in dialogue of a spiritual nature with others.

The next, and perhaps the most widely recognized mudra, is Chin Mudra. The Sanskrit word Chinmaya means, literally “manifest consciousness” - referring to the phenomenal world we see, which has sprouted from the unseen pervading consciousness. In this mudra, the seeker is asking to behold that which is unseen through the seen. To access the original consciousness from which he/she is a part.

Flowery Mudra by liz west is licensed under CC BY 2.0

To perform this mudra, hands rest on the knees, palms facing down or upward. Thumb and first finger gently touch, the rest of the fingers relax in an opened, though somewhat curled, position.

The interpretation of this mudra is much deeper than one would think at first glance, for every finger has symbolic meaning. Each finger represents a layer of the body in terms of koshas, or sheaths, three of which are “limited” and finite in their expression – and pointing toward the body. These three koshas include the pinky finger as annamaya kosha – the physical body; the ring finger as pranamaya kosha – the pranic body; and the middle finger as manamaya kosha – the mental body.  The index finger and thumb represent the vinjana mayakosha – the wisdom body and the ananda mayakosha – the bliss body – where the infinite touches the limited mind through inspiration and the understanding of where consciousness manifests in form.

By using Chin Mudra, one opens up to the infinite expression manifesting in form. In this way, the entire body, and every layer thereof, is infused with eternal remembrance and the yogi can begin to portray qualities that are “less human” and more divine.

In this hand mudra, palms are placed together and hands brought together in front of the heart in a prayer gesture. This mudra is commonly used as a greeting in India and is often accompanied by the word “Namaste” or “Namaskar” which recognizes mutual divinity and is a sign for respect. Often this mudra is named “Namaskar” during an asana practice. The benefits are simple in that it helps connect right and left hemispheres of the brain, promotes respect for self and others and helps one to link up to their own inner divinity.

Mudra and Body Prayer by Beth Scupham is licensed under CC BY 2.0

A simple variation from Chin Mudra, Akash Mudra is the touching of the middle finger to the thumb, all other fingers gently relaxed. It is often taught that each finger represents a specific element in the body, the thumb being fire, first finger – air, middle – ether, ring finger – earth and pinky – water. By touching varying fingers together, the elements of the body are combined and activated in a specific way. In Akash Mudra, the space element (ether) is touched to fire, and since fire is associated with the intellect, this mudra helps activate intuition and mental alertness. Space and fire combining promotes detoxification in the body and the balancing of the metabolic processes. It also supports the heart and throat center and helps to cleanse the emotional body.

One of the most commonly seen mudras, on Buddhist statues and the like, is the Bhumisparasha mudra, also known as “touching the earth” or “Calling the earth to Witness” gesture. It is said to be the mudra used by Buddha which assisted him in reaching enlightenment. I absolutely love the story of this mudra as well as its significance and the power it has to call in the energy of the earth to assist one in transmuting rage and anger into enlightened consciousness.

As the story goes, the Buddha was on the verge of enlightenment, and, as always occurs for the initiate just prior to “entry through the gates” of the next level of awareness, a testing occurs. He was met by the demon Mara and his army, tempting and trying to frighten the Buddha from his continued passing into the depths of connection with the Infinite. Even sexual temptations were thrown his way, and the Buddha placed his right hand on the earth and felt the earth herself bear witness to his process. The demon Mara was supposedly “claiming the throne of enlightenment” for himself, but upon touching the earth, the story goes, that the earth roared out like a lion “I bear you witness” to the Buddha, and the demon shrunk away.

The Buddha not only utilized the strength of the earth in this gesture through the right hand touching down, but also mastery of his own prana, through the left hand resting open in his lap. This is a more “advanced” mudra because only the one who has already recognized and channeled his/her own vital energy is able to simply “hold” it in his palm, watching it – if you will – while he/she continues to move deeper within.

The gesture is performed with right palm resting in the right knee and left hand open in the lap, fingers pointing to the right, hand relaxed into a cup shape.

Buddha Earth Witness Mudra by Wonderlane is licensed under CC BY 2.0

Often referred to as a Tantric mudra, this simple gesture helps to balance the masculine and feminine energies in the body – also known as one's Shiva and Shakti natures. This assists in the rising of the kundalini and the activation of all the subtle chakras, or energy centers, and is preparatory for advanced practices. This mudra is performed by placing one open palmed hand in the palm of the other – both palms facing upward. The left hand is the “Shakti” hand, and the right, the “Shiva.” Which hand is placed on top determines which vital energy is being invoked – the masculine (right) or the feminine (left). When practicing, I often alternate hands every few minutes or at a certain number of breathes or kriyas, so as to keep the balance.

Referring to the aspect of the Divine consciousness known as “Ganesha” - depicted as the boy with an elephant head, child of Shiva and Shakti (Parvati), Ganesha is called “Remover of Obstacles” and “Keeper of Wisdoms.” He is often invoked at the beginning of all projects.

The mudra is performed by clasping fingers of the left hand with the right, right hand on top, over the heart – gently pulling to feel the resistance. The hand position can also be reversed.

One of my favorite mudras is the Fearless Heart Mudra which assists in courage and inner strength and growing a connection to one's own inner truth and fearless heart. A great mudra to use if you are afraid of something or to overcome anxiety around any issue, choice or goal. This is a fabulous mudra to start the day with. It activates the heart chakra and brings awareness to the Heart Space – also known as Hridaya in Sanskrit, helping you to live that day from the heart.

By adding Mantras to our Mudras, we take them to the next level and bring their potency up. Specific mudras have associating mantras, such as the Ganesha Mudra with a Ganesha Chant (Ganesha Namaha). But using your intuition you can mix and match mantras with mudras for varied intentions and desired outcomes. The Abhaya Hrdaya Mudra is often associated with the aspect of Divine Mother known as Durga – the Fierce Warrioress. Her mantra in this case is “OM Dum Durgayei Namaha” or “OM, I bow to the one who overcomes all difficulties.”

Mudras are powerful tools to help access inner resources and find peace of mind. Choose one mudra today to begin with and record the sensations and benefits you notice as you work with it day to day. It is amazing to note the small miracles that sprout from simple practices such as these.

As I stepped out of my several months journey in the ashram in Northern India I took with me keys for accessing greater consciousness. Mudras became a silent friend and helper on my path and have continued to astonish and amaze me as I further develop my relationship with them and their hidden gifts.