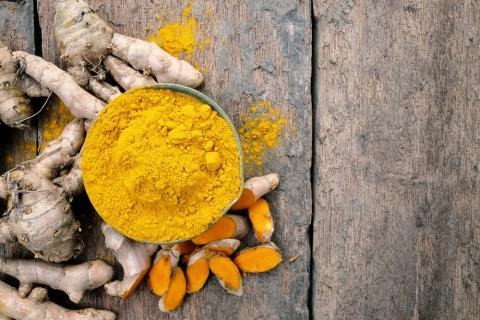 Turmeric, a bright-yellow-hued root spice, has been used in cooking, medicine, and cultural ceremonies for thousands of years, especially in South Asia. Practitioners of both western healthcare and Ayurvedic medicine, an ancient holistic healing system with Indian roots, have lauded this plant’s anti-inflammatory and antioxidant properties. And, a new study out of Washington State University discovered turmeric’s principal ingredient, curcumin, can slow bone cancer cell growth while also supporting healthy bone cells.

"Turmeric has natural anti-inflammatory compounds called curcuminoids, and these curcuminoids have been associated with a positive effect on various diseases," Anya Guy, a Mayo Clinic dietitian, said. Turmeric has been found to be effective in relation to illnesses and conditions like inflammatory bowel disease, diabetes, arthritis, cancer, and obesity. Guy adds that it is important to consult with a doctor before any efforts to use turmeric medicinally.

Within Ayurvedic beliefs, turmeric is known as “tri-doshic,” because it is believed to appease all three doshas: Vata, Pitta, and Kapha. The doshas are three ways that the five elements of life (ether, air, fire, water, and earth) manifest in different people. “How the three doshas appear, and in what proportion, is what makes each of us unique,” according to The Chopra Center. Ayurvedic healing centers on the balancing of the doshas. Turmeric is believed to warm and cleanse the body. However, in excess, it can aggravate Pitta and Vata, according to Ultimate Ayurveda.

In a study published in ACS Applied Materials and Interfaces in June of 2019, researchers revealed that turmeric could be used to create a new, natural post-operative treatment for people with osteosarcoma, a type of bone cancer that is more common among young people. Researchers want to develop “gentler treatment options” than chemotherapy for youth in this position, EurekAlert reports.

The scientists created a special calcium carbonate-based delivery method for the curcumin, so that it could be absorbed more slowly and effectively. Their delivery of curcumin to osteosarcoma patients inhibited cancer cell growth by 96 percent after 11 days, while promoting the growth of healthy bone.

"I want people to know the beneficial effects of these natural compounds. Natural biomolecules derived from these plant-based products are inexpensive and a safer alternative to synthetic drugs,” Susmita Bose said.  She’s the Herman and Brita Lindholm Endowed Chair professor at the Washington State University School of Mechanical and Materials Engineering.

Turmeric can be consumed or used as a culinary spice, herbal tea, tincture, decoction, salve or lotion. For those who want to add more turmeric to their diet, Guy of the Mayo Clinic recommends consuming it in its powder form or within sauces such as curry. “[Try] to eat it with a meal to increase its absorption," she says. She adds that it is considered safe to ingest up to eight grams of turmeric daily.

Turmeric is also known as “Kanchani,” which means golden goddess in Sanskrit. The name may be apt, as its many powers are indeed impressive.