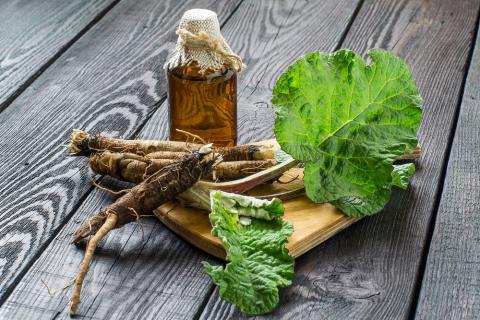 Springtime is long at last here and it’s time to take full advantage of the fantastic wild food sources that are beginning to burst from the earth. Spring is my favorite time of year to do food foraging, because there are some particularly special offerings. Spring is all about fresh beginnings: light greens, tender shoots, and cool roots. Here are some suggestions of wild plants that you can find this Spring!

Japanese knotweed first came to North America as an import to fill the niches of Central Park. Little did the designers of Central Park know what an incredibly and powerfully invasive plant Japanese Knotweed would be in the North American ecosystem. If you live in the northeastern part of the United States, especially, Japanese Knotweed shoots will be incredibly easy to find once you know what you are looking for! It is known as being a bit of a doomsday plant that will take over your yard and garden if you do not sufficiently eradicate it, and so it very much falls into the “weeds” category of human perception.

Other types of shoots very much like Japanese Knotweed that you may find in the wilderness are wild asparagus, which will grow on water’s edge in fields, and actual bamboo shoots. I’ve found wild asparagus in the Rocky Mountain region of the United States. Bamboo can also be found in waterways in the Pacific Northwest but be sure to positively identify the shoots you are collecting from a guide to your specific region.

The fern shoots, also known as fiddleheads because of their unique and uncanny resemblance to a literal fiddlehead, went through a bit of a gastronomic fad a couple of years ago, but I have only ever had them slathered in cheese and butter. I hope to be able to prepare them myself in more creative and healthy ways, because these little ferns are an incredible wild food source that can be found in many woods! It is also a resilient crop when harvested mindfully and respectfully.

Have fun getting out in the precious Spring sunlight and foraging for these amazing foods. As always, please remember the Honorable Harvest: Do not take the first plant you see, ask permission, take only what you need, and give thanks. When we practice the Honorable Harvest, we are making sure we are meeting our needs as well as the needs of the plants that have given us these great resources in the first place. Happy Harvesting!

ALL ARTICLES BY Molly McCahan