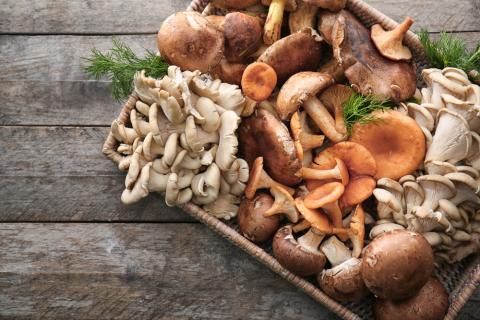 You may have heard of using lemon balm for preventing and treating cold sores. And it’s great. We know it’s helpful from a long history of traditional use as well as from research studies.  But lemon balm’s not the only game in town.

First, a bit more on herpes simplex virus (HSV), the cause of cold sores.  There are two HSVs. HSV-1 is predominantly responsible for oral lesions, but sometimes can cause genital outbreaks. HSV-2 is usually the cause for genital infection but can sometimes cause oral outbreaks. Once infected with either virus, it’s there for life—mostly laying low in nerve bundles until stress, suppressed immunity, hormonal changes, or other triggers induce a flare-up.  HSV is very contagious, and it can spread even when there aren’t any lesions.

Over 60% of adults in the US have antibodies to HSV-1, indicating exposure to the virus, and resistance of both HSV-1 and -2 to commonly used antiviral drugs such as acyclovir is growing. So, having an additional approach to dealing with herpes viruses is important.

On that note, here are additional helpful herbs…

Many people are familiar with St. John’s Wort (Hypericum perforatum) for mood.  But it’s also an anti-viral herb and has traditionally been used for cold sores, both topically and internally.  It’s considered specific for viral infection of the nerves. It, like lemon balm, can be used as an orally-dosed tonic to reduce the frequency and severity of herpes outbreaks and can also be used topically at the first sign of a flare-up: burning, tingling or itching around the mouth.  In fact, SJW pairs well with lemon balm for both internal and topical use. SJW also reduces nerve inflammation and pain, while also inhibiting HSV replication. Avoid standardized SJW extracts if applying topically.

Lavender (Lavandula species) is a wonderful pain-relieving herb that’s particularly useful for nerve pain induced by viral infection. I’ve used it in a cream for shingles…a painful outbreak caused by varicella zoster virus, the herpes virus that also causes chicken pox.  I’ve used lavender in a lip balm together with geranium and German chamomile for a client, who found it helpful when applied at the first sign of an outbreak.

A study found that a lavender-based cream  (species not indicated) was more effective than acyclovir (and placebo) in reducing pain, lesion size and time to healing. Lavender, like many mints, has notable antiviral effects and is also a vulnerary (tissue healing) herb.

Many other mints beyond lavender and lemon balm have effects against HSV, including rosemary, sage, basil, self-heal, peppermint, and thyme. Any of these would be great in an internal formula or could be used topically.  If using thyme topically, use plant preparations but not the purified essential oil, which is a skin irritant.

Oats are a traditional remedy for most things nerve-related. How many of you had chicken pox as a kid and were plunked into an oatmeal bath?  Herbalists often turn to oats for nerve pain, and research shows that components of oats, called β-glucans, may decrease the risk of HSV-1 infection.  Milky oat tops (Avena sativa, Avena fatua) are the most effective form to use. These are the fat green seed at the stage where they secrete a milky white sap.  These are used as a liquid extract that can be taken internally and applied topically.

Oyster and other mushrooms strengthen our resistance to infection by bolstering the immune system.  This may also help suppress outbreaks.  Oyster mushroom (Pleurotus ostreatus) may even have direct antiviral activity against both HSV-1 and HSV-2.  This was shown in cell culture and doesn’t necessarily reflect what would happen with ingested oyster mushroom—though cell culture results may indicate efficacy as a topical preparation.

Another mushroom, shiitake, also has anti-HSV activity, possibly by stopping the virus from being assembled and leaving the host cell (viruses can’t live independently, they rely on getting inside of a cell and using cellular machinery to build copies of itself, that then leave the host cell and spread to other cells).

When helping clients with cold sores, I usually use a blend of the botanicals discussed here…one formula to take long term as a tonic and one to apply topically, either as a liquid, cream or lip balm. In the latter case, I make the balm in a tin rather than as a stick. The reason is that a stick that’s used repeatedly could possibly spread the virus, while using a clean finger to apply balm (or cream) from a tin or other container should not contribute to spread.