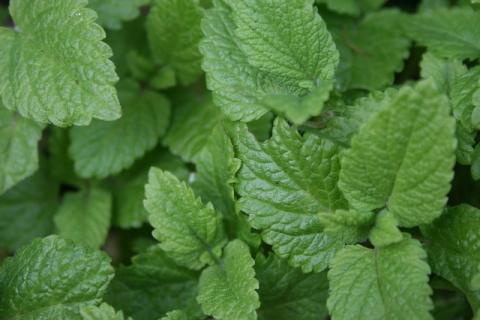 Lemon balm, also called Melissa officinalis and “the Herb of Good Cheer,” has easily become one of my favorite herbs in the past year. It tastes like a mellow, citrus-y herb (exactly what you would expect from something called “lemon balm”) but what I love most is that it’s an “all-in-one.” Not only is lemon balm calming for your nerves but it also has powerful healing properties and is especially helpful for killing viruses and lowering inflammation. Here are just some of the many benefits of lemon balm:

We’ve got radiation all around us. From microwaves to x-rays, it’s important to protect ourselves from the damage that can occur from overexposure to these harmful rays and lemon balm has been proven to do exactly that! In a recent study, 55 radiology workers were asked to drink lemon balm tea 2 times per day (about 1.5mg of tea leaves in 100ml of water). After 30 days it was observed that the plasma levels in the workers were improved as well as the oxidative stress condition and DNA damage.

Anxiety can cause heart palpitations, especially if you have sensitive nerves. In a 2015 study, 55 volunteers were given lemon balm tea every day for 2 weeks. After the trial period, it was found that heart palpitations were significantly decreased in the group taking the tea versus those who took the placebo. As a person who also suffers with episodes of heart palpitations, I can vouch for lemon balm to be one of the best ways to calm the situation down.

Lemon balm is most famous for its “calming” abilities. Nothing will knock me out quicker than a heavily-steeped lemon balm tea before bed. I’ve struggled with anxiety all my life and lemon balm is one of the only things that has made a notable difference. To prove it, a study done at Northumbria University found that lemon balm at a dose of 600 mg was shown to decrease anxiety significantly.

In a recent study, it was found that lemon balm reduced the size of cancerous tumors in the colon after only 4 days of ingestion. One more reason to add lemon balm to your tea rotation.

Lemon balm is a powerful anti-viral and has been recently touted as a herpes killer. In a study done in 1999, 34 patients were given a lemon balm cream to apply to their blisters caused by herpes simplex 2 and another group of 32 patients with the same issue were given a placebo. After five days of applying the cream 4 times per day, symptoms such as itching, burning, stabbing pain and swelling were diminished in the group who used the lemon balm cream. The healing period was also a lot shorter for the lemon balm group. Lemon balm has also been used to fight off other viruses such as chicken pox, shingles and mono, which are all co-factors of the herpes virus.

Lemon balm, when used in combination with valerian root, is like the equivalent to a sleeping pill. After going through a bout of insomnia, I am never without my lemon balm tea. I throw a couple tea bags into a cup of hot water and let it steep until it gets nice and concentrated. I drink it down and before I know it, it’s lights out. If you’re someone who just can’t seem to “settle down” or suffer with racing thoughts while lying in bed, try some lemon balm: you’ll be sleeping in no time!

A recent study tested the effects of lemon balm in patients with mild to moderate forms of Alzheimer’s disease. It was found that after four months of taking lemon balm, cognitive function increased versus the placebo. It was also found that those who took the lemon balm experienced less agitation than those who didn’t.

A study published in 2013 reported that when lemon balm oil was applied to an injury on the foot of a rat, swelling was greatly reduced and was concluded that lemon balm may have similar anti-inflammatory effects when ingested orally. Keep lemon balm in mind the next time you need to lower inflammation.