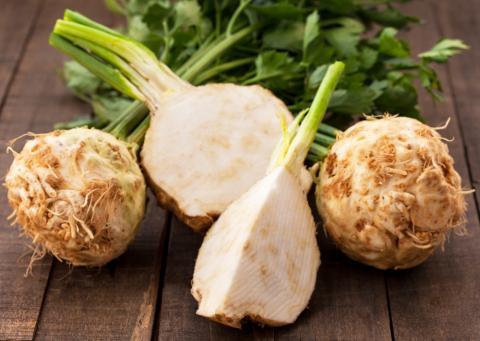 The History of Celeriac

Celeriac is a member of the Apiaceae Umbelliferae family, commonly known as the carrot family, and is a variety of the wild celery whose
scientific name is rapaceum (Mill.) Gaudin. It can be found in stores labeled as celery root. This root vegetable has been eaten in Europe for millennia and was first cultivated around the 17th century. Celeriac was originally found by Swiss and Italian botanists growing wild in the
Mediterranean area and northern Europe and it is considered to be a medicinal herb to treat many health issues. The root is rich in nutrients that include vitamins and minerals. It was introduced into the United States in the 19th century and is grown today around the world with the main production in central and eastern Europe and the Netherlands.

Celeriac is known by several different names, like knob celery, turnip-root celery, and turnip-rooted celery, but all refer to the same root vegetable. It is a large, bulbous knotted root that has a brown, stringy, tough outer skin and ranges in size from two-and-three-quarters to
four-and-three quarters inches in diameter. The flesh is creamy white with a crisp and firm texture that has a sweet, nutty flavor with a hint of celery combined with parsley. This winter root vegetable should be peeled before using and can be mashed and served as a side dish or as an ingredient in stews and soups.

The Nutrition Profile of Celeriac

Celeriac is a very healthy food to eat.  It contains vitamins E, K, and C, and most of the B vitamins. Also found in celeriac are folate, choline, folic acid, and lutein. The mineral content includes calcium, iron, magnesium, phosphorous, potassium, sodium, zinc, manganese, selenium, and copper. Other components are fiber, proteins, and carbohydrates.

The Health Benefits of Celeriac

All this nutrition means celeriac helps the body run smoothly.  The nutrition-packed celeriac helps maintain a healthy digestive system due to its high fiber content, which reduces the risk of constipation that leads to the development of hemorrhoids and colon cancer. Since it is high in vitamin C, celeriac helps fight damaging free radicals that develop in the body and can cause cancer. Celeriac also contains riboflavin, which boosts energy levels.

Growing Your Own Celeriac

You can choose to grow your own celeriac or purchase it at the store.  Growing celeriac is a simple process; the plant is grown from seed and can be started indoors in late spring and transplanted into an outside garden after the last frost. Celeriac plants need deep trenches that provide support and protect the stalks from direct sunlight. In mild climates, the growing season begins in September and ends in April. In colder climates, they do well during the summer growing season. If you purchase your celeriac, be sure the root is firm, free from damage, and does not have soft spots. The best roots are medium in size.

It is best to store celeriac in an unsealed plastic bag in the refrigerator, where it can keep up to three weeks before using.

The root has a high liquid content which will reduce the volume by one-quarter when cooked. When preparing celeriac be sure to remove all of the skin, especially in the nooks and crannies that are formed in the growth cycle. Celeriac can be cubed and used raw in salads or cut into strips and served with a dip for appetizers. It is advised to place the raw cut celeriac in lemon water to prevent discoloration. It can be served mashed by boiling the cubes for fifteen to twenty minutes and then mashing them with potatoes. It is an excellent ingredient to add to stews and soups.