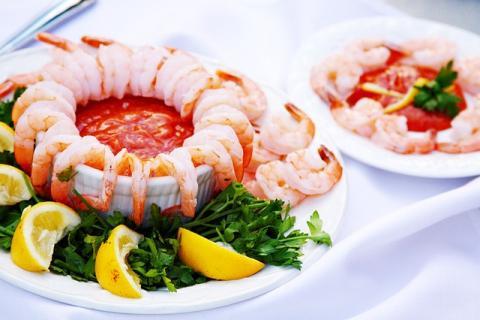 Shrimp shell broth is the new bone broth. Take your shrimp shells — something you would have thrown out anyway — and turn them into liquid gold.

Bone broth has been basking in the alternative health limelight lately for good reason. When the weather gets cold, healthy eaters tend to trade in their juicer for a crockpot to get in all the goodness that bones provide. If you want something a little different that will still offer the flavor and health benefits of bone broth, without buying an organic, free range chicken, look no further than shrimp shells.

Shrimp shells aren’t meant to be consumed, due to their hard and crunchy texture. However, when you boil them, the health benefits are huge. Shrimp shells contain a very special amino acid called glucosamine. You might have heard that glucosamine is good for joints and bone health. Well, you’re not wrong. Glucosamine is crucial for healthy joints and can be used as a treatment for osteoarthritis.

Shrimp shells also contain “chitin”. What in the world is “chitin,” you ask? It’s the plastic-like, jelly substance that is in shrimp, crab and lobster shells. When the shells are boiled, the chitin gets extracted and becomes hugely medicinal for the consumer. Chitin is antifungal and antibacterial as well as aids in weight loss, according to a New Zealand study.

Not only is shrimp shell broth incredibly good for you, it’s also crazy delicious. Try using it as a base for soups and stews. It does especially well in Asian-style dishes. I boiled my broth from 9 am to about 7 pm and was left with a golden brown liquid that smelled amazing. I stored it in the fridge overnight and was left with a thick, jelly-like broth in the morning.

Separate the shells from the shrimp. Store the shrimp in the fridge and gather the shells together. Dump into a pot of boiling water, add in onions and garlic. Reduce to low and allow to simmer for up to 12 hours. Serve with vegetables and remaining shrimp.