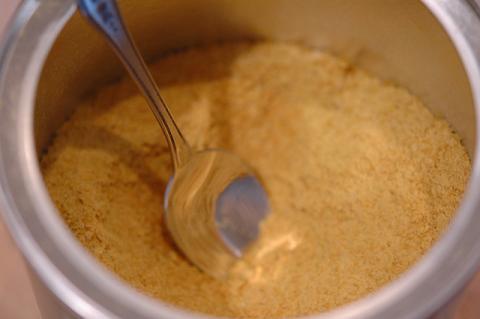 Yeast has been used since the days of the ancient Egyptians. It is a single celled microorganism that needs the same nutrients as humans, and because it is grown on sugar-based entities that lack some of the essential nutrients, the yeast manufactures its own vitamins, minerals and amino acids using a biochemical reaction. In its active form it is used as a rising agent in breads. When heated it becomes inactive and takes two forms: brewer’s yeast and nutritional yeast, both high in nutrients. Brewer’s yeast is grown from hops and used in the fermentation of beer and was first used as a healing supplement during the Spanish Civil War in 1937. Nutritional yeast is grown from cane sugar, beet molasses or wood pulp and became popular in the health food craze of the 1970s when many recipes were created using it. While brewer’s yeast is beneficial to the body, nutritional yeast has the higher nutrient content that includes all of the B vitamins, amino acids and minerals.

1. Nutritional yeast boosts the immune system. It contains a high amount of Beta glucans, essential in stimulating the immune system. They activate the macrophages which are the immune system’s first line of defense against viral, fungal, bacterial, and parasitic infection. It also inhibits the growth of tumors as in cancer. It is the only glucan found to be effective in the prevention of coronary artery disease by lowering LDL cholesterol.

2. Nutritional yeast is a significant factor in reducing free radicals. It contains as much glutathione as a California avocado. This supplies thirty percent of the recommended daily requirement of selenium. This forms glutathione peroxidase which is an antioxidant that protects the body from free radicals.

5. Studies have proven the benefits of nutritional yeast.

Australian children that had phenylketonuria were found to have had low blood levels of selenium, a critical anti-cancer mineral and antioxidant that was absent in the food supply. After taking nutritional yeast daily for six months, the children were tested again and found that it raised their selenium levels. Another study was taken on a group of elderly, non-insulin dependent diabetics. After nutritional yeast was added to their diet the results were that for all individuals, insulin output decreased and blood sugar sensitivity improved.

Nutritional yeast became a popular addition to menus during the 1970s and because of its cheesy, nutty flavor has been used to replace cheese in many vegan recipes. It is added to chips, popcorn, stews and roasted vegetables to add a rich flavor. Here is a fun recipe to add nutritional yeast into your diet, and it makes the need for butter not necessary.

3.         Once popcorn is thoroughly popped shut off heat and put the popped popcorn in a large bowl.

4.         Sprinkle the garlic granules and salt on the popcorn and shake once or twice.

Photo Credit: "Nutritional Yeast" by Jackie Sobon is licensed under CC BY 2.0