Superfood 101: Pomegranates & Their Many Benefits! 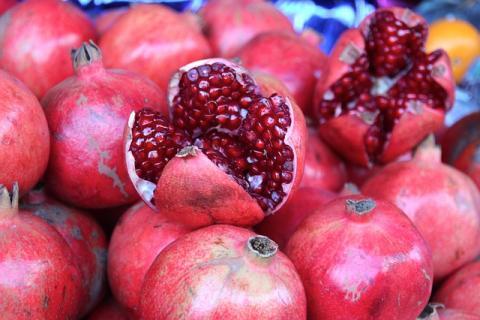 The pomegranate is native to Iran and grows wild there today. It was first cultivated approximately 6,000 years ago. Because it is a hearty fruit that is easily transported, it soon became known in regions where it could not be grown. It was recorded in the Bible and Greek writings, was popular in ancient Egypt and has been prized in India since the 1st century. The fruit was used medicinally in ancient times and early practitioners divided the fruit into three juice types: sweet, winey and acid. Pomegranates arrived in England in the 13th century and were considered a luxury treat. They arrived in the Americas with the Spanish sailors and became an established crop in California in the 18th century. It is the fruit that has a round, red and tough skin that contains wine red seeds filled with nutrients.

The nomenclature pomegranate is derived from the Middle French language term "pomme garnete" which translates to “seeded apple,” and sometimes they are also referred to as a Chinese apple. Historians believe that the apple referred to in the bible that Eve offered to Adam in the Garden of Eden was actually a pomegranate.

Getting to the seeds can be a messy and time consuming job. The easiest way to enjoy the fruit is to chill it and squeeze the whole fruit to crush the seeds inside, and then make a small puncture in the skin and suck out the juice. To get to the seeds it is suggested to cut off the crown of the fruit, score the rind and soak it in cold water for approximately ten minutes. While the fruit is in the water, break apart the scored rind and as the seeds are removed they will sink to the bottom of the bowl. Discard the rind and the membrane and drain the seeds in a colander.

Organic pomegranates are high in nutrients and are a valued healing fruit. Scientists have discovered that the fruit is high in antioxidants, containing compounds and enzymes that control cholesterol which aids in the prevention of atherosclerosis and the formation of blood clots. Further studies have found it to promote healthy coronary function while diminishing vascular inflammation and damaging oxidation. It also increases the oxygen levels to the heart.

Organic pomegranates are high in vitamin C and potassium, a great source of fiber and low in calories, making them not only a delicious snack but one of the healthiest foods you can eat.