Your Guide To Summer Flowers: Roses 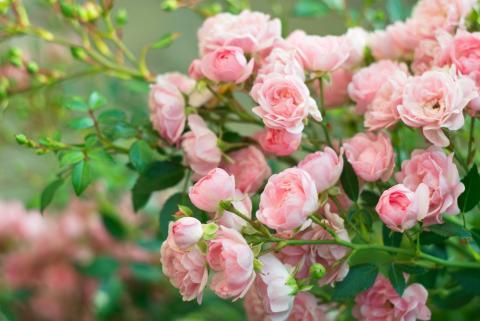 Roses are a member of the family Rosaceae or Rose family of the genus Rosa L. or rose P. The plant has approximately 150 natural species and is native to the Northern Hemisphere from Alaska to Mexico and northern Africa. Fossil evidence has found the rose to be thirty-five million years old. It is thought that the first garden cultivation of roses took place 5000 years ago in China. During the era of the Roman Empire the Roman nobility planted public rose gardens. In the Middle Eastern regions of Asia the petals were used for confetti and the plant was used as a medicinal herb. The plant found its way to Europe and in the 15th century became embroiled in the conflict to control England between the Yorks and the Lancasters. The white rose symbolized the Yorks and the red rose was the symbol of the Lancasters, resulting in the “War of the Roses.”

Roses can be either climbing, vertical, or trailing shrubs with stems that produce thorns and sharp, toothed leaves that have oval leaflets. The plant produces a symmetrical flower that is round in shape with petals that evenly grow around the central reproductive part of the bloom. The petals can be a pointed cone or a round or tear shape that can lay flat with curled edges. The bloom may contain as few as five or as many as sixty petals that grow layered and overlapping. The texture of the petals is fine and smooth to the touch with a silky nap that is soft and subtle. Roses grow in a multitude of colors that can be solid, bi-colored, tri-colored, speckled, or striped with contrasting color patterns. The bloom has a sweet, spicy aroma and the fragrance of the flower is stronger in larger flower heads with more velvety-textured petals.

How To Grow Roses

Growing roses is a project for the experienced gardener. The plant needs at least six hours of sunlight per day and must have well-draining, fertile soil. When planting from bare roots, soak them in water twenty-four hours before placing them in the ground in a hole two feet deep and covered with soil and fertilizer. The shrub needs to be watered about an inch per week: a soaker hose is advised. Mulch will protect the plant during the winter months and help to maintain moist soil.

Roses come in hundreds of genera, species, and varieties. It is best to choose those more acclimated to your region.

In colder climates the plant needs full sunlight and should be planted next to the foundation of the home to produce more blooms during the growing season and protect the shrub during the winter season. Plant roses far enough apart for full air circulation and when working with rose bushes, always wear protective gloves and clothing.

Roses make great container plants. It is important to choose the correct variety like compact and disease-resistant plants and avoid the larger shrubs and climbing roses. The container can be a half barrel or any container with drainage holes. Use quality, enriched potting soil that does not include granular or time-released fertilizer. Keep the soil moist and feed the plant from four to eight weeks, depending on the region using liquid fertilizer.

Roses are rich in nutrients that include vitamins E, D, C, A, and B3. Other healing properties found in roses are antioxidants, antidepressants, anti-inflammatories, and anticancer. Roses reduce the risk of developing cardiovascular diseases and inhibit the HIV virus. Rose oil used with grapefruit treats nausea, dehydration, urinary tract infections, ulcers, and problems in the digestive system. Rose petal tea increases the secretion of bile to clean the gall bladder, and it reduces the symptoms of sore throats and bronchial infections. Rose tea prepared with the petals, leaves, and hips reduces fevers, flushes the body of toxins, and reduces skin rashes. Steamed distilled rose water made from Persian varieties is used in the treatment of chicken pox and measles, and cleanses the blood.