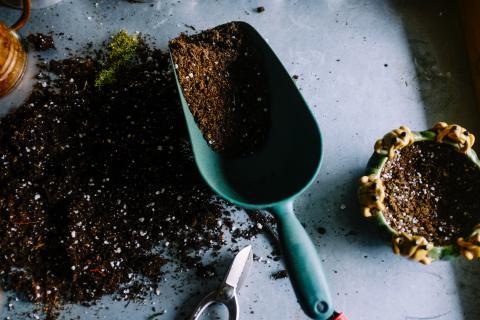 For those of us with a penchant for a green thumb, the soil can become a rather moody and mysterious being that flips out of control and destroys our work. To really get the best produce, you have got to decode soil, piece by piece…

Sounds complicated, but it isn’t. The living part of the soil refers to the plant roots as well as the microbes, earth worms, and other invertebrates and such that live in and off the soil by breaking down the organic matter in it. The recently dead are the deceased organisms and roots as well as the fresh manures—these tend to decompose quickly and rejuvenate the soil with nutrients. The very dead becomes what we call humus—which is the final residue left from the breakdown of organic matter and is very important for soil structure, pH levels, and disease control.

A truly fertile soil has all three forms of organic matter. Now here is where things begin to get a little complicated since all three organic matters are related to each other and the imbalance of any one becomes a snowballing problem for the others. Let’s imagine that we have a barren patch of soil that simply nothing wants to grow in. You could always scoop away this soil and buy fertile soil at a huge expense—or you could try and turn it fertile with a few hits and misses along the way. So let’s begin with the basics...

The Basics: Preparing The Soil

We leave you with happy thoughts of soil, produce and even geosmin – the fragrance of rain-drenched soil because not only is gardening good for the kitchen, it’s great for you and your soul! Oh, and did you know that some plants can even clean up the contaminated soil?