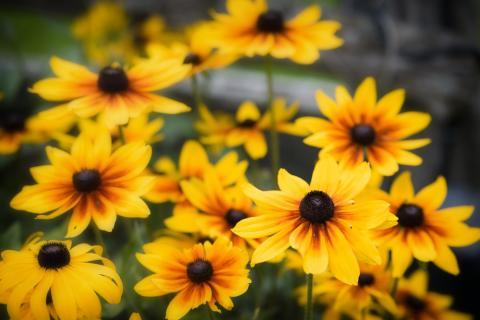 Gloriosa daisy is a member of the family Asteraceae or Aster family of the genus Rudbeckia L. or coneflower P containing the species Rudbeckia hirta L. or black-eyed Susan P. The plant  is native to several regions of lower North America and was used by several tribes as a medicinal herb.

There are several species of the plant of which this is one and all are commonly known as black-eyed Susan. Gloriosa daisy was introduced to Europe soon after Columbus landed in the Western Hemisphere and in 1753 Linnaeus named the plant Rudbeckia Hirta after his mentor Olaf Rudbeck; the term hirta is the Latin word for rough and hairy. The State of Maryland designated the gloriosa daisy as the state flower in 1918 and a garland of the flowers is draped over the neck of the winner of the Preakness horse race. It is a sturdy plant that produces blooms well into the fall season.

Gloriosa daisy matures to a height of approximately thirty inches with rough, hairy stems that produce large leaves that are ovate in shape and become more narrow at the top of the plant. They grow composite flowers with heads of deep yellow to orange rays of flattened flowers that resemble petals and have dark conical centers composed of tubular flowers. The seeds of the plant are dark brown in color and taper in shape.

How To Grow Gloriosa Daisy

Gloriosa daisy should be started indoors in cold climates ten weeks before the last frost. Each seed should be placed one-eighth inch deep in soil that is kept moist and warm.

Once the seedlings emerge, in approximately twenty-one days, place them in an area that gets plenty of sunshine, like a window with southern exposure. The seedlings can be placed under a grow light for about sixteen hours per day and should be about three to four inches beneath the light. When the plants are three to four weeks old feed them a diluted solution of plant food.

After the last frost choose a sunny area and transplant the seedling when it is cloudy or in the late afternoon to reduce plant shock. Loosen the root ball and place it in a six to twelve inch deep hole that has been turned and treated with compost; space plants eighteen inches apart. Cover the seedling with one to two inches of soil and keep moist. In warmer climates sow from seed at any time during the year. Maintain a moist soil to about one inch deep in the early morning and thin the plants as needed. These plants are drought resistant and easy to grow and maintain.

Gloriosa daisy has many benefits as a healing herb. It is a potent antioxidant resulting in the boosting of the immune system and an effective herb for treating colds and flu. The roots are made into a liquid and used as eardrops for the treatment of earaches. They are also used as an anti-inflammatory agent to reduce swelling and edema. The stems are used to lower high blood pressure, reducing the risk of heart attacks and strokes. It is also used to regulate the urinary tract. Gloriosa daisies are an excellent antidote for snake bites and insect bites and stings.