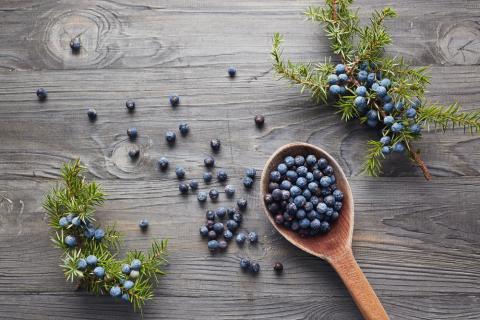 There are some scents that have been prized for millennia, being used for ritual, ceremony, worship, perfumery, and medicine. You’ll find them in ancient holy books as well as writings on medicine and perfumery that date back thousands of years.  Many of the most popular sacred aromatics, however, are not sustainable, at least at the moment.  Here, we’ll delve into some divinely scented aromatics that have been able to keep up with the exploding demand for essential oils. By the way, to see how your favorite aromatic plant is faring, sustainability-wise, you can search for it here.

Aside from its cultivation as an aromatic plant, vetiver (Vetiveria zinzanoides aka. Andropogon zinzanoides) has been used for centuries in India to stabilize the soil and purify water.  It’s now being researched and used not only for water purification, but for improving soil quality and acting as a carbon sink to reduce atmospheric carbon dioxide levels.

The “Oil of Tranquility” in India and Sri Lanka, Vetiver has been used for thousands of years in India for perfumery, medicine and worship. References to Vetiver are found in the ancient holy text of Hinduism, the Bhagavad Gita, in which Lord Krishna says “I am the fragrance of the soil”.

The tubers of nut grass (Cyperus rotundiflora and other Cyperus species) have been used as food dating back to some 40,000 years. And there’s no shortage of nut grass.  It grows aggressively and is considered a noxious weed in many places.

Cyperus was part of one of the first documented aromatic blends, kapet (aka. kyphi), itself used as a temple incense in Egypt and also used as medicine. Cyperus was used in ancient Greece for its aroma.

Earthy, peaty, smokey, nutty.  Somewhat similar to Vetiver. A base note in perfumery.

Labdanum (Cistus ladanifer, C. creticus  aka. Rock Rose) is one of my favorite base notes for perfume blending. You’d think a resin as dark and thick as labdanum would come from a root, bark or wood, rather than from leaves and branches of a shrub. The botanical name ladanifer is derived from the Arabic ladana, which evolved to labdanum. The sticky resin was harvested in ancient times from the hair of goats and sheep that grazed among Rock Rose shrubs.  This evolved to collecting the resin using a device—a lambadistrion—resembling a rake, but bearing strips of leather rather than metal tines.

Cistus originated along the Mediterranean but has since naturalized elsewhere in the world, providing habitat for a wide range of animals.

Labdanum was used as perfume and medicine in ancient Egypt…it is another ingredient in some kapet recipes. Labdanum was burned as an offering to Aphrodite in Cyprus and may have been an ingredient in ketoret, a sacred Hebrew incense. It’s been posed that the wealth of the first pharaohs may have originated with labdanum and that the flail commonly seen in representations of the god Osiris and of ancient Egyptian royalty is a depiction of a lambadistrion.

Calming and grounding, yet elevating at the same time…making it a great meditation oil.  Despite the sedating properties, Labdanum is known as an aphrodisiac.

Junipers are found all over the temperate world. There certainly is no shortage of juniper (Juniperus species) here in the American Southwest, where it is becoming a dominant species.  Both the berries and the leaves are most commonly used for their aroma, but the wood is also burned for its highly aromatic smoke.

Juniper has been burned for many millennia for protection and purification across multiple continents. It was also important to ancient goddess worship, and later showed up in Judaic, Islamic, and Christian traditions. Juniper wood was burned in Europe to contact the otherworld during Samhain and, here in North America, features largely in the histories of Hopi, Diné (Navajo), Blackfoot, and Seneca nations.

Who knew that this common spice was once so highly valued that wars were fought over it?  Cinnamon (Cinnamomum species) was once worth more than gold. (And which would you rather sprinkle on your pumpkin spice latte?)

Cinnamon was used in multiple aromatic blends from antiquity, including one called “The Egyptian,” originating, well, in Egypt. It was also used in the embalming process in Egypt.  Multiple scent blends originating in ancient Greece included cinnamon, where it was also burned as incense in homes and temples.  Cinnamon is also documented in writings from China that date back over 4000 years, and is referenced in several parts of the Bible.

Hmmmm…I’m thinking that all five together would be a heavy, but divine blend.  Small amounts of the heavier oils (vetiver, nut grass, and labdanum) and larger amounts of juniper, with cinnamon in between.  Happy blending!