Your Guide To Summer Flowers: Lavender 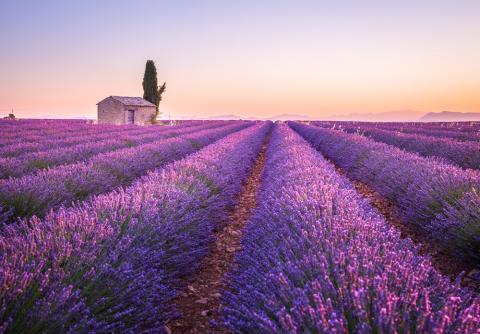 Lavender is a member of the family Lamiaceae or Mint family of the genus Lavandula L. or lavender P containing four species. The plant is thought to be native to the Mediterranean basin east of India and has been used in many ways for approximately 2500 years.

Lavender’s name is derived from the Latin word “lavare,” meaning “to wash,” because the Romans added the flower’s fragrance to their baths, beds, clothes, and hair. They also used the plant as a medicinal herb. Lavender was considered an important healing herb by Dioscorides, a Greek naturalist, in the 1st century C.E. In the Middle Ages it was applied to the floors of castles and the room of the sick as a disinfectant and a deodorizer. It was an ingredient in smelling salts, as a treatment to heal wounds received during wars, and as an insecticide to protect material from moths. Today the plant is a decorative landscape flower and is used in floral arrangements.

Lavender can be found in many regions of the world and unlike the reference to the name the blooms can vary in color and can be violet blue, rose, pale pink, white, and yellow. The flowers will vary in form and size depending on the variety and blooming time also varies from one location to another.

The most popular of the genus is the English Lavender which grows leaves that can be lance-shaped, blunt, or linear and are white with dense stellate hairs on both the top and the undersurface when immature and more green at maturity. The leaves can grow up to two-and-one-half inches in length. The plant matures to a height of one to three feet with branches that are short and irregular with yellow-grey bark that flakes. The flowers grow from shoots on a long stem and spike with rings of six to ten blooms. They grow in a group of six to ten with short stalks of three to five in the axils of adjacent bracts. English lavender blooms from mid-June to early July. To extend the blooming cycle and keep color in the garden it is advised to plant several different varieties of lavender.

How To Grow Lavender

Growing lavender will bring color to your garden from early summer and into the fall season. The plant likes cool climate, full sunlight, and dry soil; for warmer climates it is advised to grow lavender in containers. To plant them in containers use a high-quality potting mixture and be sure that the container has good drainage. In colder climates the plant can be brought indoors during the winter season and in warmer climates the plant should be brought indoors during the summer months and the container needs to be placed in an area that receives full sunlight. When growing in the garden mix the soil with stones to ensure good drainage. Once the plant is established it needs little maintenance. Pruning is advised when the stems become woody as it matures and the entire plant should be cut back to half its height in the spring.

Lavender has several uses as a healing herb. Because of its soothing fragrance it has been used for centuries in aromatherapy as it relieves stress and anxiety; it also reduces the incidents of insomnia. By adding the flowers to bathwater it acts as an anti-inflammatory agent due to its content of antioxidants. Its antiseptic qualities can be applied to cuts and wounds with a poultice of crushed leaves. Chewing the leaves or making it into tea will relieve gastrointestinal maladies like bloating and cramps. Its healing effects were noted by one of the founders of aromatherapy, Rene Gatefosse, when he burned his arm and immediately immersed it in lavender oil, resulting in accelerated healing; it also prevented infection and left no scar. In World War I lavender was used to dress the wounds of injured soldiers.

Lavender can be used as a seasoning for many dishes and adds a delicate floral and light sweet tastes to salads, soups, entrees, and baked goods. Its oil is extracted from its flowers and its leaves are used for medicinal purposes. The blooms are dried to be used in sachets, air fresheners, and confetti at weddings.