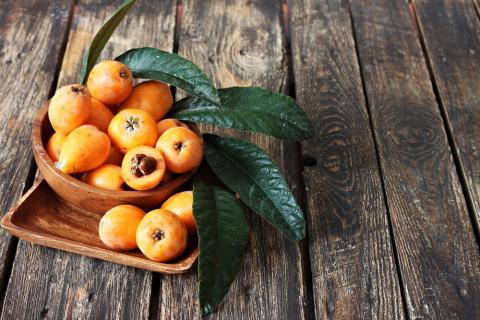 Loquat is a member of the family Rosaceae, commonly known as the Rose family of the genus Eriobotrya Lindl. or loquat P of the species Eriobotrya japonica (Thunb.) Lindl. or loquat P. The plant is native to southeast China. It was possibly introduced in Japan where it has been cultivated for more than 1,000 years. It was first brought to Europe in 1690 by botanist Kaempfer and later described by Thunberg in 1712. In 1784 the National Gardens in Paris first planted loquat later to be grown in the Royal Botanical Gardens at Kew, England in 1787. It then gained popularity in North Africa and other parts of Asia. The plant has been grown in the Americas since 1867 and today there are more than 800 varieties of the plant. Loquat is rich in nutrients and used as a healing herb that includes the leaves, blossoms, and fruit. While these parts of the plant can be ingested the seeds are highly poisonous and it is advised to keep loquat away from children though the fruit is safe for them to eat in moderation.

Loquat grows on a coniferous tree with fragrant flowers. The fruit grows in clusters containing four to thirty loquats that range in size from one to two inches. They can be round, oval, or pear-shaped and have a smooth or downy skin with various shades of yellow, orange, or red hues. The pulp is succulent with a sweet, sub-acid, or acid flavor and can be white, yellow, or orange in color. The fruit contains an average of three to five seeds that are approximately five-eighths of an inch in length and five-sixteenths of an inch in diameter, have an angular elliptical shape, and vary in shades of brown

Loquats are rich in nutrients that include vitamins A, C, and B-complex vitamins thiamin, riboflavin, niacin, pyridoxine, folates, and folic acid. They also contain the minerals iron, calcium, manganese, potassium, phosphorus, zinc, copper, and selenium. Other nutrients found in loquats are monounsaturated fats like omega-3 fatty acids and omega-6 fatty acids and fiber in the form of pectin.

There are many healing benefits of loquat, like regulating blood pressure due to the presence of potassium which reduces the stress on the cardiovascular system, inhibiting the development of stroke and heart attacks. It also provides increased blood circulation to the brain, improving cognitive function. The antioxidant contained in the fruit reduces the free radicals that form naturally in the body, thus controlling the development of cancers.

Other healing benefits of loquat include the reduction of the development of mucus in the respiratory system where bacteria grow and cause colds and other maladies. It also boosts the immune system by using the vitamin C to rebuild damaged tissue. The fiber in loquat is beneficial to the digestive system and helps the body regulate weight.

How to Grow Loquat Trees

Loquat trees are subtropical plants that are used primarily for decorative landscaping in colder climates. The tree can be grown where citrus trees do well and can be planted in a variety of soils. They need warmth in order to germinate and do not produce fruit when grown in containers. It is best to use a one-year-old balled plant and allow enough room for development; by ten years the tree will bush to approximately twelve to fifteen feet. The tree will bear fruit in about eight years and will develop more fruit if planted in full sunlight.

How to Use Loquats

There are many applications for loquat and they are used in many recipes. They can be an ingredient in espanole, a brown sauce, and used to make dumplings. They lend themselves to jams and jellies, and are an excellent dessert like loquat foam and loquat cream. Loquats can be used in any recipe that uses peaches, apricots, or plums.