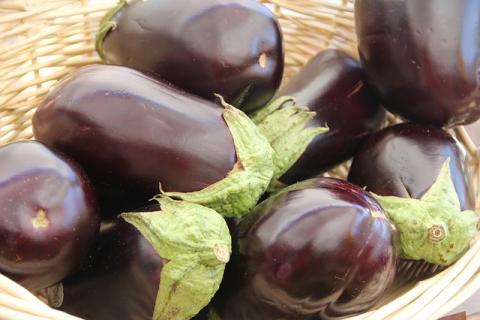 Eggplants have a unique texture, whether raw or cooked in a stew. Their purple skin provides a pleasant sight to the eyes and a delicious charred flavor when grilled. But more than tasting good, eggplants contain chemicals that stop cancer in its tracks.

Shutting Down the Power Plants in Ovarian Cancer

Cells have mini power plants inside of them called mitochondria. These little membrane pouches produce energy molecules that power the protein machines throughout the cell. Cells cannot survive when they don’t have enough of these power plants working inside of them. Thus, when too many of these power plants break down, they release proteins that kill the cell from the inside.  Eggplants contain a chemical called 9-EE-KODE. Researchers wanted to see if 9-EE-KODE had any effect on ovarian cancer cells. To the delight of eggplant lovers, this chemical caused leaks to form in the walls of the power plants (mitochondria). As things leaked out, so did the proteins that start the suicide process inside the cancer cells.

Metastasis is when a cancer spreads from one organ to another, destroying it as it takes over. In order to metastasize, cancer cells must release enzymes that digest their way through the stuff that is outside of them. In tissues, cells sit next to each other in a web of proteins, sort of like how bees live in holes in a honeycomb. In order for a cancer cell to spread through the honeycomb, it must release enzymes to digest the walls. Eggplants contain a chemical called delphinidin, which is able to slow the spreading of fibrosarcoma cells. Fibrosarcoma cells release two enzymes, called MMP-2 and MMP-9, that digest the stuff between neighboring cells. Delphinidin can reduce the activity of these two enzymes, making it harder for the cell to move and infect other cells.

Scientists who study cancer often want to measure whether a cancer cell is alive or dead after receiving a treatment. A common method is to use a salt called tetrazolium. This salt is able to push through the membrane of live cells. Cells that are alive have chemicals that react with the salt, producing a reddish product. By measuring how red the cells become, the scientists can determine how many cells are alive before and after a treatment. Eggplants contain chemicals called solamargine and solasonine. Using the tetrazolium salt method, researchers were able to show that these two eggplant chemicals caused liver cancer cells and colon cancer cells to die. The chemicals killed liver cancer cells better than it did colon cancer cells.