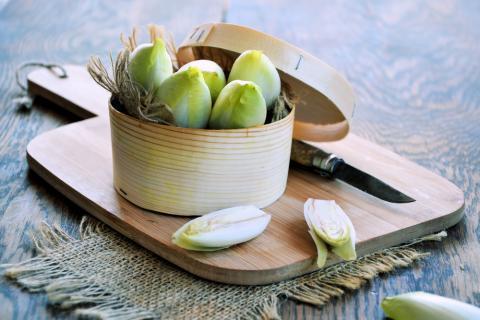 Endive is a member of the family Asteraceae, commonly known as the Aster family of the genus Cichorium L. or chicory P that contains two species that include cultivated endive P and chicory P. The plant has three main varieties: the Belgium endive, the curly endive, and the broad leaf endive. It is native to Asia Minor but is now found growing in North America and Europe. It is rich in nutrients and has been used medicinally for treating many maladies. Endive is said to have come from the area of the Mediterranean and is native to Sicily; it was included in the diets of the Romans, Greeks, and Egyptians. The vegetable was mentioned in Ovid’s “Philemon and Baucis,” and Pliny describes it as being used in salads and as an herb. Endive was cultivated in England in 1548 and was brought to the United States in the early 19th century; then in 1826 the large, rooted varieties were grown in France.

The Belgium endive grows in a cylindrical lettuce-like head that is small with yellow compact leaves that slightly curl at the edges. It has a moderately bitter flavor and is grown in dark rooms beneath the soil to maintain its pale color and delicate flavor. Curly endive is also known as frisee or chicory and grows in a bushy head with lacy textured leaves that are curly in structure and green in color. It also has a bitter flavor that is more prevalent in the leaves. Broad-leafed endive is also known as escarole which is less bitter in flavor than the other varieties with light-colored inner leaves and darker outer leaves which tend to be more bitter and tougher in texture.

Nutrients found in endive are vitamins A, ß-carotenes, and B-vitamins that include B9 or folic acid, B1 also known as thiamin, B3 called niacin, B5 known as pantothenic acid, and B6 or pyridoxine. The mineral content of endive includes magnesium, calcium, and iron.

Endive also has a high fiber content, enabling it to help clean the body of free radicals and promote healthy digestion and balance the metabolism. It also prevents constipation, and it reduces the risk of cardiovascular diseases and cancer because it helps to reduce bad cholesterol levels. The presence of B-vitamins promotes brain health and reduces the risk of developing maladies like Alzheimer’s disease and dementia.

The vitamin A content in endive promotes ocular health, keeps the skin healthy, and promotes healthy mucus membranes. Endive is also a factor in reducing the incidents of stroke, lessening the risk of developing gall stones, preventing Scoliosis, and reducing the risk of urinary tract infection. Endive can also facilitate weight loss as it is a low-calorie vegetable.

Endive is an excellent container plant but it is recommended to use commercial potting mix and not garden soil. Planting endive outdoors requires cool temperatures because the seed will not germinate in temperatures above eighty degrees. It is best to sow in average soil in early spring in full sunlight for a first harvest and in late summer for a fall harvest. Plant the seeds twelve inches apart, a quarter-inch deep, cover with a fine layer of soil, and keep the area moist. Seedlings will emerge in seven to ten days and thin as the plant grows to stand eight inches apart, giving the heads enough space to develop. In approximately forty days the leaves will reach the size of ten inches; then band the heads to blanch the inner leaves to develop the bitter flavor. Be sure to remove the bands during rain so the plant does not develop root rot.

Endive can be found in food markets throughout the year and it is advised to choose the crispy and tender leafy tops and do not use the heads that have tough yellow outer leaves. Store the leaves in a plastic bag in the refrigerator for no more than four days.

To prepare endive for use in recipes, fill a bowl with cold water, put the leaves in the water, and swirl them around until all of the dirt is settled to the bottom. Then remove the endive and dry the leaves in a spinner or drain them dry in a colander. Endive can be used in many recipes as the leaves add to the depth of flavor in salads and are used as an ingredient in soups and stir-fry recipes, and they can also be cooked as a side dish, mixed with other cooked vegetables, and used as an ingredient in juices.

Endive is a cool climate plant that is easily grown in the garden or as a container plant. It is rich in nutrients which helps heal the body and reduces the risk of developing many diseases. Endive has earned a place on the list of superfoods.