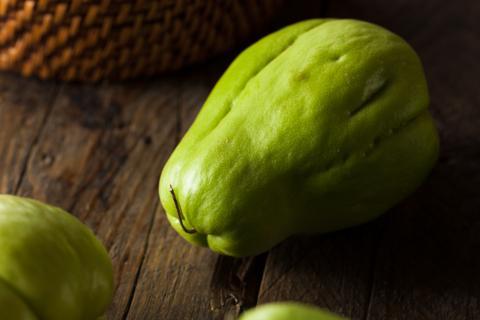 Chayote squash is a member of the family Curcurbitacaea, commonly known as the gourd family. The plant is native to the Americas and was a staple in the Aztec culture; it was first cultivated in the area now known as Mexico. Chayote squash was introduced to the world by the invading Spaniards and can be found today in northern Africa, Indonesia, and China, to name a few regions. The nomenclature was derived from the Aztec language Nahuatl word chaytl and has found other names like “vegetable pear” and “one seed cucumber” as it moved into North America. Chayote squash grows much like a weed, spreading to approximately fifty feet in area and each plant bears about 500 fruit. Because of its growth it is not a popular addition to vegetable gardens. It is a highly nutritious plant and has been used by the Incas as a medicinal herb. Chayote squash is a versatile vegetable that can be eaten raw or cooked.

What is Chayote Squash?

Chayote squash is a perennial vining plant that requires a long, warm growing climate and needs well-draining moist soil. The vine needs support to keep it off the ground. It produces small, white blooms that can be male or female. Chayote squash mature and are ready for harvesting thirty days after pollination. The skin of the fruit is pale green in color with shallow vertical furrows on the surfaces and the texture can be spiky, smooth, or fuzzy. The flesh of the fruit is white, surrounds one large, cream-colored seed, and has a taste similar to pumpkin or butternut squash.

Chayote squash is a healthy vegetable that is made up of mostly water. It contains vitamin C, vitamin B6, and folate. It is a good source of fiber, is rich in potassium, and has very little sodium. The squash is a good addition to a weight loss diet as it contains only sixteen calories per three-and-one-half ounces and contains no saturated fats or cholesterol; it is also rich in antioxidants. Chayote squash also has a high content of iron, manganese, phosphorus, zinc, copper, and vitamins B1 and B2.

Because it is rich in folate, chayote squash helps the body perform healthy cell division; thus it can prevent neural tube defects in pregnancy when taken before and during the first trimester. It also contains small amounts of antioxidants like apigenin and luteolin, which destroy free radicals and reactive oxygen species (ROS), resulting in the slowing of the aging process and inhibiting the formation of diseases like cancer. The superfood’s fiber content is a factor in lowering cholesterol levels and aids in a healthy digestive tract.

Other health benefits of chayote squash include the treatment of kidney stones using the leaves of the plant, and lowering high blood pressure when consumed as a tea or eaten. When the tea is mixed with the flesh of the vegetable it can reduce stomach problems like flatulence and other signs of indigestion. The high content of vitamin C helps to prevent heart disease and reduces the risk of stroke. The presence of vitamin B2 prevents the occurrence of anemia.

Chayote squash is available in the United States from October through April and can be found throughout the year in Latin American and Asian food stores. The best vegetable will be medium in size and the color of a granny greening apple that is firm to the touch. Avoid chayote squash that has pits, cracks, surface cuts, or bruises. Large vegetables will have a tough skin and stringy pulp that may be undesirable.

Chayote squash has many culinary applications that can include pickling, steaming, baking, sautéing, or eating it raw. The squash can be an ingredient in fritters, tarts, puddings, and sweetmeats. The seeds are also known as vegetable scallops and can be sauteed in butter to achieve a nutty flavor; they can also be deep fried and have a taste similar to French fried potatoes. The young shoots, tendrils, and leaves can be eaten much like asparagus. The roots of the plant are called chinta or chinchayote and can be baked, fried, or candied and made into syrup.