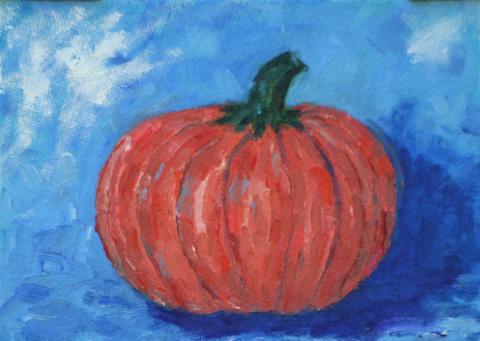 The pumpkin is a member of the family Cucurbitaceae, also known as the cucumber family in the genus Cucurbita L. – gourd P, which contains nine species. The familiar orange pumpkin popular in the United States is of the species Cucurbita mixta Pang. – pumpkin P. The pumpkin is native to North America and was discovered in Mexico and the seeds were dated between 7000 and 5500 B.C.E. The original pumpkins were of the squash type with crooked necks and were farmed with sunflowers and beans. Once maize was discovered the Native Peoples planted pumpkin, maize, and beans in a method known as the Three Sisters. The maize stalk provides a support for the vining beans while the pumpkin plants protect the shallow maize roots, preventing weeds from growing and keeping the ground moist. They prepared pumpkins in many ways, like roasted strips of pumpkin over open fires, or baked, boiled, and parched pumpkin. The dried flesh was stored and ground into flour. The flowers were added to stews and the seeds were eaten and used in healing. The dried shells became plates, bowls, and storage containers.

Columbus brought the pumpkin seeds to Europe where they were used as fodder for livestock. The Pilgrims were introduced to pumpkins and would cut the top with the stem and scoop out the seeds, and then fill it with cream, honey, eggs, and spices before placing the top back on the pumpkin. They would bury it in the hot ashes of the cooking fire and once completely cooked they would remove it from the ashes, scoop out the flesh, and eat it as custard. The pumpkin was a main staple for the early American settlers; they fermented it into beer and used the shell as a template for cutting hair, and in their European tradition they were used to make Jack-o’-lanterns.  The name pumpkin was derived from the Greek word "pepon" meaning melon; the English modified it to "pumpion" and in America it became known as pumpkin.

Here are some benefits and interesting facts regarding pumpkins:

1. Pumpkins are rich in nutrients. One cup of cooked pumpkin contains forty-nine calories with two grams of protein, twelve grams of carbohydrates, and three grams of fiber. There are also traces of calcium, iron, magnesium, copper, potassium, zinc, selenium, folate, niacin, and vitamins C, A, and E. The beta carotene contained in pumpkins can reduce aging, the risk of developing some cancers, and the incidence of heart disease.

2. Pumpkins are considered fruit and are relatives to gourds, squashes, melons, and cucumbers. The plant produces both male and female flowers, making it easy to pollinate. Its seeds are edible and are used in salads or seasoned and baked for snacks, and they are a valuable tool in healing.

3. Pumpkin seeds have many health benefits, whether in the form of meal or pressed for the oil. They are an excellent source of promoting prostate health by controlling the production of testosterone, thereby inhibiting the growth of the prostate. The oil reduces the effects of postmenopausal symptoms like hot flashes and high blood pressure. The seeds can reduce the incidence of heart disease, liver disease, kidney stones and arthritis.

4. The juice of the pumpkin can be used to treat ulcers and is effective in reducing the incidents of insomnia. Pumpkin flesh helps in controlling adolescent behavior and sexual hyper-excitability. It can be made into a cream for treating burns, abscesses, and inflammation on the skin; it is also an excellent tool to hydrate the skin, reducing wrinkles.

5. Pumpkin seeds are not only beneficial to humans but to pets as well in much the same way. Studies have revealed a reduction of the incidents of parasites in dogs when pumpkin seeds were added to their diet. Cooked pumpkin aids in canine weight control and digestive disorders.

Pumpkin reaches maturity in the late summer and early fall, making it a holiday addition to menus. It has been a part of the human existence for millennia as a food and healing aid and for making plates, bowls, and containers. It is rich in nutrients, helping to prevent many diseases and health disorders like cancer, diabetes, hormonal disorders, heart disease, liver disease, and skin disorders, and it slows down the aging process. Pumpkin is not only a holiday favorite but is a healthy addition to any diet.