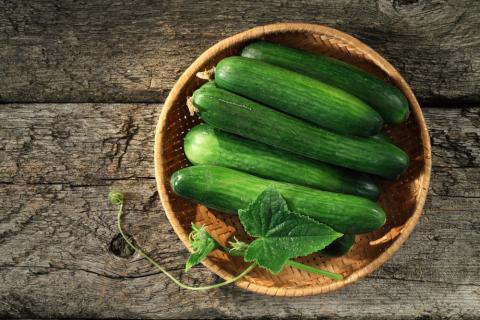 Cucumbers are in the genus Cucumis L. or melon P of the species Cucumis sativus L commonly known as the garden cucumber P. The plant is believed to have originated in western Asia in India and regions of the Middle East. Cucumbers have been documented in the legend of Gilgamesh in 2500 B.C.E. and found their way to Europe in approximately the 1st century where it was cultivated. Cucumbers were brought to North America in the 16th century and have been commercially established in California and Florida and other sub-tropical and tropical areas to provide the population with cucumbers throughout the year. They are high in nutrients that concentrate in the seeds and skin, making the entire fruit edible. Today they may be waxed but only the organically grown cucumber is waxed with non-chemical contaminant products; it is advised to purchase non-waxed, organic cucumbers. They can be used in many salad recipes or as an ingredient in cold soups.

Cucumbers grow in many species and varieties and are divided into two basic groups, slicing and pickling. The slicing cucumbers are used fresh and usually have dark green skin; the color depends on the variety and can be white, yellow, and orange. The skin is thick and either smooth or textured. They usually grow in long cylindrical shape but can be slightly oval and even round. The pickling cucumbers are smaller and have a thinner and darker skin than the slicing varieties, making them ideal for pickling, and they can be eaten raw.

Cucumbers are packed with healing nutrients, including vitamins A, C, and K, magnesium, potassium, manganese, iron, and calcium. They are rich in phytonutrients such as flavonoids, lignans and triterpenes, and have natural antioxidant and anti-inflammatory properties.

As a cancer fighting food cucumbers are packed with phytonutrients, particularly lignans. This specific substance is an effective deterrent of breast, ovarian, uterine, and prostate cancers and is also a factor in the reduction of cardiovascular disease. Cucumbers also contain a significant amount of antioxidants and anti-inflammatories that are known to reduce the harmful free radicals formed naturally in the body.

Other health reasons to include cucumbers in the diet is that they help prevent and cure diabetes because they contain a hormone that regulates the production of insulin in the pancreas. Cucumbers also strengthen the connective tissues of the joints with their substantial source of silica, thus reducing the incidents of arthritis and developing gout. Cucumbers promote a healthy digestive system because of their high content of water and fiber; they help to eliminate toxins in the digestive tract and are a factor in promoting weight loss.

Growing cucumbers in the garden is easy and will provide a continuous source of cucumbers for the entire growing season. There are two types of cucumber plants vining and the bush lends itself to containers while the vine variety is planted in the garden with provided support. In containers, be sure to keep the soil warm and the plant should fruit in approximately six weeks. To plant vine varieties outside, start plants indoors and transplant after the last frost in fertilized soil. They should be placed in the ground about an inch deep and spaced about a foot apart next to the trellis so the vine can be trained to grow on the support. Keep the plant moist by watering frequently, saturating the ground only. Harvest before the fruit is too large, six to eight inches for slicing cucumbers and about two inches in length for pickling varieties.