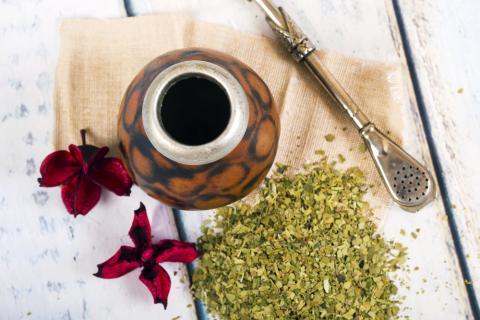 Tea has been used by many cultures as a medicine, and is considered a pastime in countries all over the world. Yerba mate has a different story. It comes from the Guaraní peoples in Paraguay, Argentina, Uruguay, and southern Brazil, where it is known as chimarrao. The blend has been hailed by health experts for the antioxidants and caffeine it delivers, and although all regions that drink mate do it in a similar way, they each have their own variant on the tradition of yerba mate.

Like other teas, yerba mate has many nutritional benefits, such as amounts of iron, calcium, manganese, and vitamins B1, B2 and C. Research has also found that yerba mate prevents hardening of the arteries by helping fat move through the arteries.

Traditionally, yerba mate is consumed from a gourd, or an implement that looks similar to it, as well as a metal straw. Water for it must be heated and should never be boiled because it can burn the leaves and will also be unpleasant to drink through the traditional metal straw used in the process. People buy a thermos to keep their water at the same temperature as they continue to drink. Yerba mate is also available in tea bags, and is called mate cocido.

In Paraguay, people often mix yerba mate with orange juice and a few ice cubes in a mix called terere. It’s actually the country’s national drink and is a great way to have yerba mate on hot days, and this blend is popular in neighboring countries during the summer.

In Argentina, people often drink yerba mate along with cakes, desserts, and other sweet snacks because it offsets the bitter flavor. It’s common for people to drink this around 3-5 p.m., or after work, though some people prefer it in the morning because of its caffeine levels, usually with a piece of toast or other bread.  Some people add orange rind, mint leaves, or honey to their yerba mate to enhance the flavor, and some people prefer it with sugar.  Argentina is known for being a meat eater’s paradise. Some people also have mate before or after the traditional asado (barbecue) while they wait for the food to be prepared, or afterward if there’s dessert.

Many in South America gather in parks during the summer to drink yerba mate or terere.

It’s common to fill the gourd three-quarters full, shake off excess powder, and start pouring water into the mate gourd. The person preparing the mate tends to taste it first to make sure it’s not too strong, and in Argentina people take turns drinking from the same gourd and straw until the taste of the yerba is gone. In winter, friends often get together and brings snacks, as well as yerba mate, and hang out. It’s a nice way to bring together a group of people, socialize on a budget, and have a healthy traditional drink.

In my time in Buenos Aires, I also found that drinking mate with locals allowed them to teach me local customs and sayings and allowed people who were less well-off to socialize with those who were. There seems to be a special appreciation for just going to a park and bringing something you can share, knowing that people will appreciate that you’ve brought something for everyone. It’s also common to see families and couples having picnics with mate, as sharing a mate gourd with others is also a way to bond.

Yerba Mate in the United States

Many South American immigrants or former travelers to Argentina, Uruguay, and Paraguay buy their yerba mate at health food stores or have relatives bring some during visits. It’s common for people to continue gatherings, and many South Americans will add some sugar into the drink for first-timers so they can start getting used to the bitterness, bringing a new tradition to Americans who enjoy trying new things.