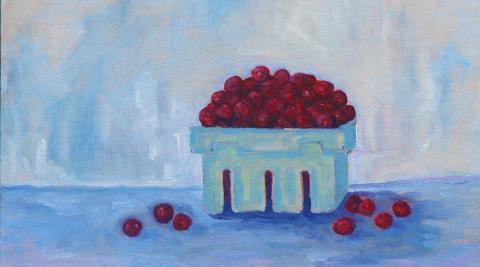 There are many species of cranberry that grow in the temperate zones of the world, the species Vaccinium macrocarpon Aiton is the cranberry native to North America. It is found in both the northeastern and northwestern areas of the continent and was used by the Native Peoples for food and medicine. They introduced the plant to the pilgrims, who used the fruit for pie and tart filling; recipes have been recorded as early as 1672. The Native Peoples of the northwestern areas used the cranberry for trade but it was not until the early 19th century that the European settlers began cultivating the cranberry and by midcentury it became a commercial crop. Cranberries were eaten fresh until World War I when companies canned them in gel form which became a popular product. After World War II homemakers were encouraged to freeze cranberries for future use and by the end of the 20th century they were promoted as additions to salads as healthy food high in vitamin C. Today, cranberries are commercially grown throughout the world. The European cranberry is farmed primarily in England and has a sweeter flavor than the American cranberry; however, it is smaller. The Australian cranberry is more acid with stringy flesh. In North America, Massachusetts, New Jersey, Wisconsin, Oregon, and Washington State are the primary growers of the crop.

The cranberry was called several different names, depending on the Native tribes. It was not until the Dutch and German settlers arrived that the nomenclature cranberry evolved. Because the plant looked to them like the neck, head, and bill of a crane they referred to it as a “crane berry.” The cranberry is a member of the family Ericaceae, also known as the Heath or Heather family which contains 125 genera and approximately 3500 species. The plant is a low-growing shrub that is a woody perennial having small, oval leaves that grow from vine-like shoots. It throws runners on the surface of the soil that take root to form a dense mat. The flowers also grow from shoots opening in late spring to early summer and produce ripe berries in early fall.

There are two harvesting procedures: wet harvest and dry harvest. The wet harvesting procedure involves flooding the cranberry bog with approximately eighteen inches of water the night before harvesting takes place. Then an implement called a water reel, also known as eggbeaters, is used to dislodge the berries. Because cranberries have air pockets they float to the surface of the water where they are corralled with paddles to a loading zone. This method is harsh on the cranberries so they are used in processing juice, canning, sauces, and other products. Fresh cranberries sold in the produce section of markets are harvested by the dry method that uses mechanical rakes to comb the berries off of the shrub.

1. Cranberries are rich in nutrients that include vitamins C, K, and E, as well as minerals such as copper and manganese; also found in cranberries are pantothenic acid and fiber. This makes cranberries a valuable food to fight disease and keep the body healthy.

2. The juice of the cranberry has a powerhouse of healing benefits. Adding cranberry juice to the diet will help prevent urinary tract infections, and lower the risk of developing cancer, heart disease, respiratory disorders, and diabetes. It also helps to keep a healthy digestive system, as well as healthy oral hygiene.

3. The cranberry is a powerful antioxidant containing several compounds that include quercetin. These help the body lower LDL cholesterol while increasing HDL cholesterol blood levels. It also includes vitamin A, which contributes to ocular health.

4. Fresh cranberries are available from early fall to early winter in markets. They should be deep red in color with a smooth skin and firm to the touch. Do not purchase cranberries that are soft or wrinkled. They can be stored in the refrigerator for several days but will not stay well at room temperature.

5. There are many ways to use cranberries in recipes to make muffins and breads; they can be used as pie filling and make excellent taste variations in ice cream. They are a great snack, both fresh and dried, and can be added to salads.

There are many species of cranberries found throughout the world. One that is native to North America is found in the temperate climate of the continent. It was introduced to the pilgrims by the Native Peoples and began to be commercially cultivated by the mid-19th century. It is grown in bogs and harvested in early fall and can be found in supermarkets, health food stores, and open-air markets up to early winter. It is a versatile food that can be added to many recipes, eaten as a snack, and added to the diet for its healthful benefits.