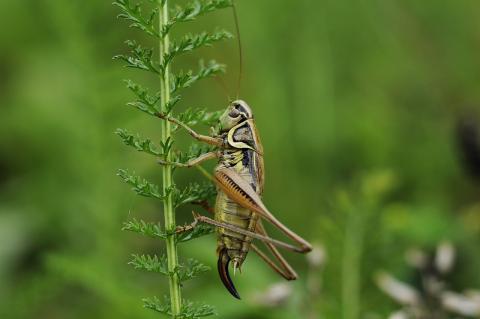 Protein powder has been controversial in the past few years, not necessarily because of what it does—provide a solid dose of protein for post-workout nutrition or those who struggle to get in adequate amounts for various reasons—but because of how it’s made and, more specifically, what it’s made from.

Whey protein can be detrimental for those with lactose intolerance or vegan diets, while plant-based proteins are often chalky and tasteless, often thanks to a blend of pea, quinoa, and brown-rice proteins. Amongst the endless shelves of protein powders available at mainstream health food stores, however, one new type of protein is chirping out (pun intended): cricket protein.

You might feel initially squeamish, but hear me out: over 80% of the world’s countries eat insects, and besides—you’re already eating them. An insect control company based in Pennsylvania found that the average person eats more than 140,000 insect parts each year. As Business Insider states, “You may not be able to see or taste these tiny bug bits, but rest assured: mealworms, maggots, roaches, and beetles can be found in everyday foods, especially coffee beans, chocolate, and wheat flour.” While few people would be excited to eat maggots, crickets are a delicacy in many parts of the world. Take Thailand, for example. It’s home to the biggest cricket production facility in the world, which makes sense: crickets are often a snack paired with beer. They can be fried in a wok, seasoned, and purchased at food carts on the street. Still not convinced? Here are just a few reasons why crickets might just become the next superfood.

Just two tablespoons of cricket flour contains 10 grams of protein, 4 grams of fat, and just 1 gram of carbohydrate. Talk about a protein punch! Crickets are also a terrific source of iron, B-vitamins, and calcium, in large part because you’re not just eating the meat, but the bones and organs. More importantly, these vitamins are even more absorbable than beef!

Compared to beef, the production of which is one of the biggest contributors to global warming, crickets are incredibly sustainable. Cricket farms require far less land and resources, not to mention, you’re eating the entire animal, meaning that nothing is wasted.

If you’ve ever tried cricket protein, you probably didn’t believe what you were eating. After all, crickets are somewhat crunchy and mild, meaning that once they’re blended into food, they’re pretty much non-existent taste-wise. Better still, as a new-to-the-market protein with the potential for turning-off people at first glance, brands have found creative ways to incorporate crickets: Exobars, Chapul bars, Chirps chips (literally chips made with crickets), Crik protein powder, Bitty’s air-puffed cricket chips, Entomo Farms cricket powder, and a start-up to make crackers out of crickets, cleverly titled Crickers, for example.

This is perhaps the most important part. I’ve yet to try fried crickets, but I’ve tried bars, flours, and protein. The verdict? It’s good. The taste is slightly nutty, but without the chalkiness of some plant-based protein. There’s little worry about bloat from the absence of whey, and there’s no overwhelming saltiness from bone broth-based or beef protein powders.

While I’m partial to crickets, not everyone is…for some, the thought of eating anything insect-based is terrifying, but they’re worth trying. This TEDx talk on the future of food is certainly suggestive. Do a quick google search on “cricket flour recipes” and more than 437,000 results pop up. Breakfast biscuits, lemon poppy seed muffins, and banana bread are all readily available in insect form, but with this gluten-free, high-protein new product, the sky is the limit.

For those who are skeptical of the taste but want to enhance the already-nutty taste, try this simple smoothie that will win over anyone—insect skeptic or not.

Add all ingredients to high-powered blender and blend well. Serve!

Have you tried cricket protein powder or tasted a baked good made from cricket flour? What did you think? What recipes do you recommend?