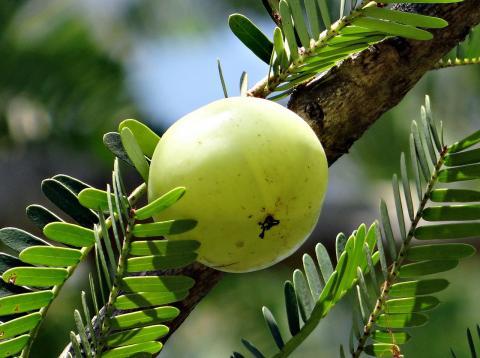 Triphala is a traditional Ayurvedic herbal formulation consisting of three fruits native to the Indian subcontinent: Amalaki (Emblica officinalis), Bibhitaki (Terminalia belerica) and Haritaki (Terminalia chebula). Triphala translates literally to mean “three fruits,” and comes from combining the Sanskrit words “tri” meaning three, “phala” meaning fruit and “churcha,” which means powder. Appropriately named, triphala is made from the dried powder of these three fruits, though the triphala supplement can be found as powder, capsule, tablet, or liquid extract.

The three fruits of triphala each correspond to one of the three doshas of Indian Ayurvedic medicine, and together they contain five of the six tastes recognized in Ayurveda (sweet, sour, bitter, pungent, and astringent) with only salty not included on the list. Used for over 2,000 years, triphala is a staple of Ayurvedic medicine. References to the use of triphala can be found in the Sushruta Samhita, which is dated to 1500 BC. As such, triphala is one of the longest-used herbal remedies in the world. In India, triphala is considered the best and most versatile of all herbal formulas.

What are the Benefits of Triphala?

Triphala is used to tone and support normal bowel activity and overall digestive function, and helps to restore muscular function and contractility of the intestinal wall. More specifically, triphala assists with natural internal cleansing, maintains regularity, nourishes and rejuvenates the tissues of the intestinal walls, supports healthy digestion and absorption, and is a natural antioxidant, protecting cells from the damaging effects of free radicals. Triphala is considered to be a natural alternative to over-the-counter laxatives, which can often irritate the bowels excessively.

In addition to helping in areas of digestion and bowel movement, triphala is used to support healthy respiration and cardiovascular health; to lower cholesterol levels; to support urinary, reproductive, and nervous system health; and to naturally treat cancer. Triphala contains gallic acid, ellagic acid, and chebulinic acid, which are all strong antioxidants, as well as flavonoids and polyphenols, which have antibacterial, anti-inflammatory and antidiarrheal properties. In addition to its many other uses, triphala can be applied topically to reduce healing time of bruises and sunburns, and has been used as a tonic in hair and in eyewashes.

What do each of the 'Three Fruits' of Triphala do?

Of the three fruits, Amalaki has a cooling effect that manages Pitta, supporting the natural functions of the liver and the immune system, and it is the fruit that supports intestinal repair. Additionally, it is said to have 20 times the vitamin C content of an orange. As such, it is often used to treat the common cold and fever. While useful for all doshas, it’s said to be particularly effective for balancing the Pitta dosha.

Bibhitaki is particularly good for Kapha, supporting the respiratory system, and is said to be a powerful detoxifier of the body. Of the three fruits, Bibhitaki aids digestion by pulling old mucus off the intestinal walls. Bibhitaki is used in traditional Indian Ayurvedic medicine for the treatment of diabetes, high blood pressure, and rheumatism.

Haritaki is understood as having a “heating” nature according to the Ayurvedic system, and is nonetheless good for all three doshas (Vata, Pitta, and Kapha), and is considered to be particularly calming to the Vata dosha. Haritaki strengthens the intestinal muscles to contract more efficiently when the bowels need to move, and is known for its “scraping” effect, which removes toxins and helps maintain healthy levels of weight. Haritaki has been used in Indian and Iranian medicine to treat dementia and diabetes and has anti-inflammatory properties.

How to Take Triphala

Triphala is usually taken on an empty stomach and can be ingested in a few different ways: the powder form can be used to make a tea by adding a half-teaspoon of powder to one cup of hot water. The powder can be put into a spoonful of honey or ghee before a meal, if you prefer. The tablets and capsule forms are typically taken once or twice a day, before food, and the liquid supplement is usually taken as 30 drops in water or juice, one to three times daily. All of that said, please always consult your Ayurvedic health consultant or local health practitioner, or at the very least read the directions on the packaging.

It is said that larger doses of triphala tend to have more laxative effects while smaller doses tend to be more gradual and blood purifying (and along these lines, if you find yourself having very loose bowels for an extended period of time, you may be taking too much). While triphala can be taken over long periods of time, it is recommended that every 10 weeks, you should take a break for two to three weeks to give the body a rest and to maintain the effectiveness of the remedy.