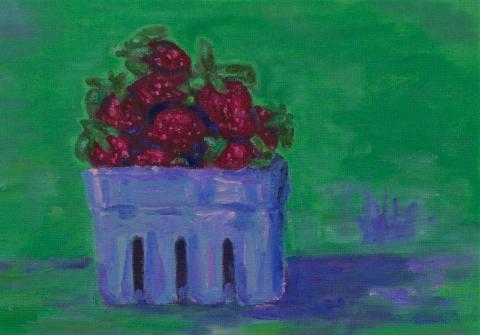 Strawberries are the ultimate summer fruit. I remember going strawberry picking with my family every year as a kid. We would make a whole day out of it and at the end we would get freshly-made strawberry ice cream right from the farm itself. We made lots of jam and strawberry-rhubarb pies with our harvest, and though strawberries taste amazing in desserts — there’s a whole lot more to these berries than meets the eye.

We assume that strawberries aren’t a “superfood” just because of how common they are. They’re pretty much everywhere and are one of the most popular flavors in the world, especially in candies and treats. We also might have been “scared away” from eating them due to the high amount of pesticides and genetic modification that has no doubt been applied to the farming of America’s favorite berry. Though the pesticides in strawberries can be harmful to the body, they’re easily removed by soaking the berries in cold water in the fridge overnight. This is especially important to do if you aren’t buying organic or local.

Without further ado, here are some little known health benefits of the humble strawberry:

One study established that strawberries had the highest amount of antioxidants out of all fruits and vegetables commonly available in the UK -- beating out red cabbage, raspberries, spinach and broccoli. Here I was thinking that blueberries were the only thing with antioxidants. It turns out, strawberries are pretty high up there!

It was found in a Nurses’ Health Study that women who eat just 3 servings of strawberries and blueberries per week had a 33% reduction in risk of a heart attack[US2] . It was also found that postmenopausal women who ate strawberries consistently over a 16-year period had a significant drop in their risk of death from cardiovascular disease. There’s a reason why strawberries are considered “good for the heart.” They even look like one. Get in all the strawberries you can to keep your heart in tip-top shape.

In a recent study, 38,176 US female health professionals were asked whether they ate fresh, frozen, or canned strawberries “never,” “less than one serving per month,” or “up to 6+ servings per day.” It was found that those who consumed more strawberries had lower CRP levels (C-Reactive Protein, used to measure inflammation in the body) than those who hadn’t.

In a five-year study, it was found that those who ate more foods from the Rosaceae botanical subgroup (which includes peaches, raspberries, plums, and strawberries), had a lesser chance of developing esophageal cancer versus those who didn’t. It is believed that the high levels of carotenoid compounds in strawberries give it its cancer-fighting powers.

In a study, it was shown that participants who consumed either fresh or frozen strawberries had a reduction in oxidized LDL cholesterol as well as oxidative stress associated with metabolic syndrome or eating high-fat meals. It looks like even if you don’t have the best diet, just adding in a few strawberries here and there can have a huge benefit.

We all know blueberries are king when it comes to preventing Alzheimer’s disease, but strawberries come in at a close second. In a nurse’s study done by the Channing Laboratories at BWH, it was found that women who consumed 2 servings of strawberries over a period of 2 years showed significant reduction in memory decline versus women who didn’t eat strawberries.