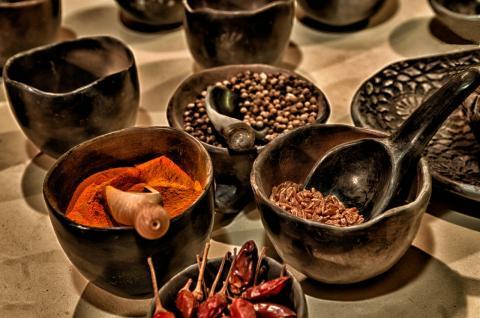 Some really effective herbal medicines are in the kitchen, and here in Part 1 are my favorite uses for myself and my clients. In Part 2 next week, we’ll flip things around and look at culinary uses for medicinals typically neglected in the kitchen. You can geek out more on how to use kitchen herbs and spices for health here and here. Remember that quality counts . That cumin that’s been sitting in your grandma’s cabinet since the Nixon administration is not going to be helpful.

When out playing in the snow, cinnamon can usually be found in my pocket (along with some lint and crumpled old receipts). Cinnamon keeps hands and feet warm by sending blood to them (the nerdy term for this action is “peripheral vasodilator”). You can put your cinnamon powder in size 00 capsules to take on the go or make an extract by filling a jar halfway with freshly ground cinnamon and adding vodka or brandy until the cinnamon is topped by about a half-inch of liquid. Strain after 2 weeks and there you go!  A mouthful of straight cinnamon powder is not the most pleasant experience, just FYI.  Some folks put cinnamon powder in their gloves and socks, also effective for drawing warm blood to the area. I have not tried this. Sounds kinda messy.

Cinnamon is also an ally for supporting healthy blood sugar regulation. Blood sugar provides the energy our cells need to live, but when levels get too high in our bloodstream, it’s a problem. One way cinnamon works is by helping cells take up blood sugar more efficiently, which means that cells have the fuel they need and blood vessels don’t get sticky and clogged by too much sugar.  This is not to imply that that frisbee-sized cinnamon bun will be cool for blood sugar regulation.

Nutmeg comes from an evergreen tree that is native to Indonesia, where the spice has traditionally been used for insomnia. Nutmeg is a strong and useful sedative. Up to a few pinches in some warm milk about 3-4 hours before bed is a great sleep aid, and once it kicks in the effects generally last 8 or so hours.  Don’t take too late at night or you may be grogged out in the morning!

Note that more is certainly not better. A fellow I know took a tablespoon of powder for sleep and wound up on the floor from dropping his blood pressure and pulse rate. Keep that in mind the next time you add it to your eggnog (I know, I know….wrong time of year).

Not only is it one of my favorite spices, black pepper also provides a wealth of health promoting activities.  It’s a friend to achy muscles and joints, though due to its heat, black pepper is not good on new injuries that are swollen and hot. A few days post-injury or for chronic or slow healing injuries is when it’s best, by bringing healing blood into the area.

Black pepper is also a great liniment for warming up cold muscles before a workout. This is an effective way to reduce the frequency of muscle pulls.  When I get lazy and stop using black pepper liniment before training, my injury rate and soreness after boxing and cycling increase. Especially as a 40-something whose body doesn’t quite bounce back like it used to.  For a pre-workout “warm up” consider infusing olive oil with black pepper. Better yet, add some rosemary as well; they work well and blend nicely together.  Fill a clean and dry jar halfway with freshly ground black pepper.  Add olive oil until the surface of the pepper is submerged by about 1/2 inch.  Put the lid on and set the jar in a sunny window for 2 or more weeks.  Strain and get ready to warm up!

Fennel is one of my favorite herbs in cold and flu blends. It soothes overworked “coughing muscles” and tastes great. Not only that, but the volatile oils responsible for fennel’s pleasant scent are active against respiratory bugs.  Blend it with a bit of licorice, cinnamon, and ginger and you have a powerhouse tea especially useful for colds accompanied by the chills.  For a cooler blend, keep the licorice but add marshmallow and mullein root in place of ginger and cinnamon.

Fennel has traditionally been used for women’s reproductive health and is well known for promoting breastmilk production.  Not as many folks may know that it can help bring back a missing period (assuming that pregnancy or menopause isn’t the issue).  It’s good to get some testing done to find out why menses may be suppressed, but fennel may be worth a try in the mean time.

Do you have an annoying chronic cough?  If so, thyme is your friend.  It eases a wide variety of chronic, spastic coughs as a tea or extract. To make your own extract, fill a jar halfway with thyme and add alcohol (vodka or brandy) until the thyme is covered by about a half-inch of liquid. Strain after 2 weeks.  If drinking thyme tea doesn’t sound spectacular, add some lemon and honey…it’s actually quite good!  Thyme is perhaps better known for cold and flu, where it’s very effective due to its strongly scented volatile oil, which ultimately makes its way to the lungs after ingestion of thyme.

Thyme tea or extract is also useful against “bad” microbes in the digestive and urinary tracts. Thyme is a warming herb, so for a full on, burning urinary tract infection, combine thyme with a more cooling herb like marshmallow (Althea officinalis).

By the way, if growing your own thyme, don’t overwater it. This reduces volatile oil production, weakening thyme’s medicinal punch. Because thyme is so easy to grow or otherwise obtain, I like it as a substitute for osha (Ligusticum species), a popular respiratory remedy that is on the United Plant Savers’ “At Risk” list due to the potential impact of human activity on osha populations.

Marjoram is fantastic for a sore throat and was a traditional remedy for professional singers to keep their vocal cords in tip-top shape.  Not only does marjoram reduce inflammation and soothe pain, it also kills viruses and bacteria responsible for throat infections. I like it best as a tea with lemon and a bit of raw local honey added.

Marjoram is soothing for the emotions as well.  We all know that there’s nothing that can stop the pain of a broken heart, but a strong cup of marjoram tea can provide a bit of gentle support when your heart is hurting and your mind is going in circles. Lemon balm is a good addition.  And, do a little aromatherapy while you’re at it…conscientiously breathe in the steam while you’re sipping your tea.

That’s all for now. Stay tuned for part 2 and learn how to use medicinal plants and mushrooms in your recipes…