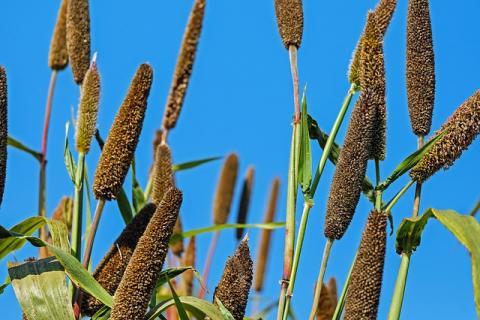 Millet is a prehistoric grain native to western Asia. By approximately 3000 B.C.E. the grain had found its way to China where it became one of the five sacred grains. Of the many varieties of the genus the common millet arrived in Europe about 200 B.C.E. where it got its name, which meant “cereal” in Old English. It was used as cereal for human consumption and livestock feed. Millet was also found in North Africa and continues to be a staple food in many of the continent’s countries. It was used in the making of unleavened bread and the Indian flatbread known as roti. The main world producers of the grain are India, China and Nigeria. It was brought to the United States in the 19th century and used primarily for birdseed and livestock feed. Millet is a highly nutritional grain that worked its way into the recipes as a valuable addition to the diet.

Known as bajra or ragi depending on the variety, millet is an important grain for Ayurveda because it is considered sweet, heating, dry and light and used in excessive Kapha dosha. Depending on how it is prepared, millet can be a tridoshic grain. Holistic healers use it because it has a high vitamin and mineral content and is a good source of fiber and protein. There are many health benefits to adding millet to the diet – here are a few!

1. Because of the copper and iron content in millet it aids in the production of red blood cells; thus, it helps to oxygenate the body as well as reduce the presence of and cure anemia. With the presence of phosphorus it also helps to control blood pressure.

2. Millet lowers the risk of Type-2 diabetes because of its high magnesium content. This mineral works as a co-factor for more than 300 enzymes which includes those essential to glucose and insulin secretion. It also balances the blood sugar levels..

3. Millet has a high calcium and vitamin D content, which translates to supporting bone health. It is ideal for growing children by strengthening developing skeletal systems and lessening the incidence of fractures. It also prevents bone deterioration in seniors, lowering the risk of osteoporosis.

4. There is an abundance of antioxidants found in millet that are beneficial to the body in many ways. They are a natural sedative, relaxing the body and enabling a restful sleep essential for cell repair and growth in children. One primary antioxidant is tryptophan, which raises the levels of serotonin in the body, resulting in the reduction of stress that leads to disease, depression, hypertension and migraine headaches.

5. Millet is rich in B vitamins essential in many functions of the body. They help to efficiently break down carbohydrates and fat. They are conducive to reducing the level of homocysteine in the blood stream, helping to prevent the build-up of cholesterol deposits. Niacin in particular prevents cholesterol from entering the circulatory system and raises high-density lipoprotein (HDL) levels. Adding millet to the diet in turn reduces the risk of stroke and heart disease.

Millet is available in health stores, packaged and in bulk. It can be used as flour, cereal or cracked as in couscous. There are many more health benefits contained in millet and it is recommended to add it to the diet to help keep the body healthy and strong.