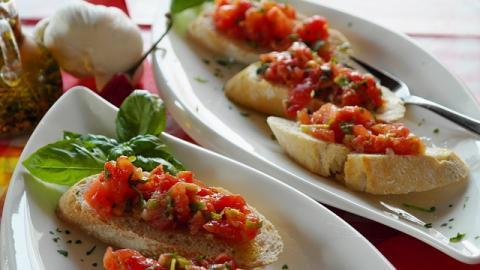 Tomato season is officially in full bloom, and apart from making salsas, pasta sauces and BLTs, bruschetta is another great way to serve up this year’s bounty. This recipe is essentially like a Caprese salad on a crostini, which makes for a delicious afternoon snack or appetizer before any summer meal.

This recipe calls for Roma (plum) tomatoes, but really any type of tomato will do. I’ve made it with heirloom tomatoes and cherry tomatoes, and it turns out just as fresh tasting. Do make sure to seed whatever tomatoes you’re using, though, because the seeds and extra juices can water down the bruschetta. This recipe also calls for mozzarella, but that can easily be taken out or substituted to make the dish dairy free and vegan friendly.

Mix tomatoes, basil, mozzarella and garlic together in a bowl. Drizzle 3 tablespoons of olive oil and red wine vinegar over the mixture, and add salt and pepper to taste. Mix together again, and let stand.

Preheat the oven’s broiler, and set the oven rack about 6 inches from the heat source.

Place the sliced bread on a baking sheet. Brush remaining olive oil onto the top of the bread, and then sprinkle dried oregano on top.

Broil the bread until golden brown, for about 2 minutes. Remove from the oven.

Spoon the tomato mixture evenly over the toasted bread slices, and serve immediately.