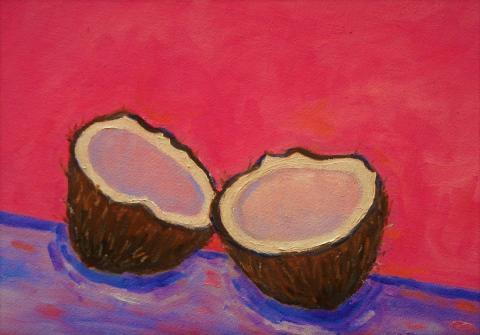 Coconuts are a rich source of nutrients that have a myriad of applications. There are just as many ways they can be prepared. The nomenclature coconut is confusing because it is not a nut at all, but instead a drupe or fruit that has three layers: an outer layer that is smooth and green, a fleshy middle layer that is fibrous and a hard, and a woody layer that surrounds the seed. This third layer is what we find at the market. The origin of the coconut is somewhat mysterious. One theory is that it was first found growing in India. Cosmos, a 5th Century Egyptian traveler, wrote about the “Indian nut.” It is also known as the “Tree of Life” as every part of the coconut is used. During World War II and the Vietnam War, the coconut water was used to replace intra-venous solution when in short supply.

Ripe coconuts are what we buy in the supermarkets and produce stands, but young coconuts are a mainstay in the tropical diet and can be found in Asian and Mexican markets. Its water is rich in minerals and potassium. The fruit is more tender and juicier than the ripe coconut, and it is highly nutritious. It has been used to treat heart, liver and kidney disorders and it has been recently reported to “reduce the viral load of HIV.”

To prepare the coconut for opening, place it on a flat surface. An inexpensive chef’s knife will do fine because this procedure is rough on knives. A very sturdy spoon will be needed to scoop out the coconut meat. If the whole coconut is being opened, turn the coconut on its side and cut off the husk. Inside, there is the hard shell of the fruit that has three “veins” running from its center. Insert the tip of the knife between the veins, and then tap the handle of the knife to put pressure on the shell. When the knife is approximately one inch into the shell, lower the angle of the knife, keeping the tip of the knife inside the coconut and moving the handle in a rotating manner, left and right. This will loosen the top which then can be pried loose as a cap. Then the water can be poured into a container and the fruit can be scooped out.

Coconut oil, which is extracted from the meat of mature coconuts, has been recommended by healers for centuries. It has been documented that coconut oil can dramatically reduce the rate of seizures in epileptic children. It moisturizes the skin, protects hair against damage, and can be used as a sunscreen. It helps with weight loss by reducing hunger pangs and can improve blood cholesterol levels. It is advised that to get the benefit of coconut oil, you should use only organic, virgin coconut oil and do not use refined coconut oil.

The coconut is truly one of the world’s super foods.