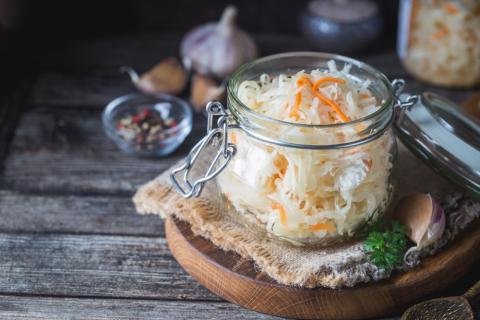 Probiotics are live microorganisms that serve as beneficial bacteria. They have been known to help enhance as well as protect your health. There are many different ways to eat probiotics, with yogurt being among the most popular of choices. But not everyone can, nor desires to eat yogurt all the time, and we could always use more plants in our diet! So, for those of you who want to know about a few plant-based foods that contain powerful probiotics, here are seven!

This probiotic drink has existed for centuries, and can be easily-made at home or purchased. Kombucha is a fermented tea created by bacteria and yeast colonies. On top of containing healthy microorganisms, its claimed benefits include weight loss, improved digestion, hair loss prevention, detoxification, improved liver function, strengthened immune system, cancer prevention and more. The fermented drink is also said to contain B-vitamins as well as vitamin C. Although I absolutely love drinking most kombuchas, the slightly earthy, vinegary taste might not be for everyone, but then again, there are many factors that can affect its overall quality.

The fermented probiotic food is Indonesian inspired, and considered the most beneficial when eaten raw. It’s a naturally-made bean cake, consisting of a tempeh spore-cultures and soybeans. Usually used as a protein replacement, tempeh is said to have many microflora-probiotic benefits such as increased bone density, reduced cholesterol, muscle recovery, improved immune system, digestion support and much more. This superfood is claimed to be packed with high amounts of B-vitamins as well. Not only has its growth in popularity made it easy to buy at most grocery stores, but it is also fairly simple to make.

The probiotic bread is known for its sour taste. When researching some of its health benefits, I learned about its uses for digesting proteins and starches, lowering insulin levels, breaking down gluten, preventing chronic diseases, and so many other excellent benefits. This tangy, fermented bread contains no cholesterol, and is super rich in a number of vitamins and minerals. The sourdough is made with flour that has a naturally occurring bacteria and yeast. Although it is traditionally made with only three ingredients (fermented sourdough starter, salt and flour), it does take a good amount of time to make. But believe me when I say, it’s totally worth it! You can buy it at almost any local grocery store as well.

This fermented, probiotic-rich food is traditionally eaten in Japan. It has a really interesting texture, taste, and smell, but it’s protein-rich and filled with lots of vitamins. Some of its mentioned health benefits include lowering high blood pressure, preventing osteoporosis, protecting against cardiovascular diseases, building stronger bones, and more. To make Nattō, you soak whole soybeans, steam or boil them, and then mix in the Bacillus subtilis bacteria. If you can’t make it, you can usually find it at most Asian farmer’s markets or stores.

Miso is another traditional Japanese seasoning paste rich in probiotics. It is created by fermenting soybeans with salt and the fungus, Aspergillus oryzae. The tangy-salty bean paste can be added to almost any cooked dishes such as soup, ramen, or stir-fries. In Japan, it is common for most people to eat a bowl of miso at least once a day for a healthy diet. A lot of natural health advocates claim that miso is great for its dense nutrient concentration, and its remarkable disease-fighting properties. Like tempeh and Nattō, the probiotic paste can also increase concentration and contains beneficial bacteria for the digestive tract.

Kimchi (kimchee or gimchi) is a high-fiber, traditional Korean dish that is considered to be one of the world’s healthiest foods. It is a reddish, fermented cabbage mixture of garlic, salt, vinegar, chili peppers, and other spices. It is packed with vitamins A, B, and C. Kimchi contains a beneficial bacteria known as lactobacilli. According to some studies, this bacteria has been known to help with digestion and preventing yeast infections.  You can easily make your own kimchi or purchase a jar from almost any local grocery store.

Sauerkraut is considered Kimchi’s non-spicy cousin because it’s basically cut cabbage that’s been fermented. The cabbage fermentation process is completed by different kinds of healthy lactic acid bacteria such as Leuconostoc, Lactobacillus, and Pediococcus. The sour food is known to contain beneficial probiotics as well as vitamins C, B, and K. A few mentioned benefits of Sauerkraut are cancer prevention, peptic ulcer prevention, immune support, energy improvement, and digestion support. It is most beneficial when uncooked and can be bought from most local grocery stores or easily made at home.

Probiotics are amazing! They have the ability replenish the helpful bacteria in your gut and help inhibit the growth of harmful bacteria. If you haven’t been getting enough probiotics in your diet, why not try one of the options mentioned above?