Your Guide To Summer Flowers: Coreopsis 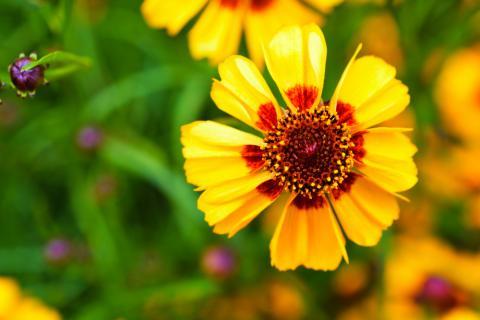 Coreopsis is a member of the family Asteraceae or Aster family of the genus Coreopsis L. or tickseed P containing thirty-four species. The plant is native to North and Central America and was recorded in the journals of the Lewis and Clark expedition that took place from 1804 to 1806. Along with other plants they sent samples of the flower to the Bernard McMahon Nurseries in Philadelphia who made the seeds available to the public. In 1851 Joseph Breck wrote a description of coreopsis in his book “The Flower Garden.” Coreopsis is known by several nomenclatures that include tickseed, calliopsis, plains coreopsis, dyer's coreopsis, and golden wave. The Latin word “koris” means insect or bug and “opsis” designates that the plant resembles the prefix koris. The Native People used the flower to make a beverage and the pilgrims stuffed their mattresses with the dried flower to repel bedbugs and make dye.

Coreopsis can grow to about eight feet and can be found in the prairie, around the perimeter of wooded areas, and along roadways and railroad tracks. The erect, slender stem is topped with a single bloom similar to a daisy that produces eight yellow petals that are round at the tip and mature from one to two inches in diameter surrounding a flat, brown center. The plant blooms from mid to late summer and into the autumn season. The stems produce three narrow lance-shaped leaves that have an anise aroma.

How To Grow Coreopsis

Coreopsis is a good plant for novice gardeners. It is a low maintenance flower that is ideal as a border or fill-in plant. They can be started from seed or purchased from a nursery and the varieties vary in size and color. Sow or transplant in a sunny location and keep the soil moist; the plant will bloom from three to five years. As the flowers fade during the blooming season dead head or shear off the upper stems to allow continued flowering into the autumn season. As they are a prairie flower they do well in dry environments so in humid areas they probably will not need watering. As the blooms lessen it is time to divide the plant and sow them in the spring or fall. Growing coreopsis from seed they should be started indoors from four to six weeks before the last frost or directly into the garden after the last frost. Existing plants will tend to seed themselves. They are relatively pest resistant plants but will fall prey to snails and fungus in humid areas.

There are many species and varieties of coreopsis. The species coreopsis auriculata 'Nana is best used as a border or in front of taller plants and produces blooms late into the growing seasons as long as they are deadheaded. Coreopsis grandiflora, also known as big flower coreopsis, produces bright yellow blooms that grow from one to two inches in diameter. The sunburst variety produces large semi-double flowers. Other hybrids can grow to approximately 1,122 feet in height and 212 feet in width and can be either annuals or perennials. The autumn Blush produces butter-yellow flowers with red centers and Limerock Ruby grows ruby-red flowers that can be one-inch wide. Sienna Sunset bears rich salmon-orange blooms while the Hardy Jewel series grow in various colors depending on the plant. Nurseries will offer many choices to fit into any garden.

Coreopsis can be used to promote vomiting or as a treatment for diarrhea using a tea made with the root. The entire dried plant was once used as a substitute for coffee. The dried flowers are used for yellow dye. The plant name means “always cheerful” and the Native People of the Americas used them to make their colorful fabric. Coreopsis is excellent for butterfly gardens and the seeds attract birds. It is also an excellent container plant. It is the state flower of Mississippi and Florida and the National Garden Bureau designated 2018 as the Year of the Coreopsis.