Your Guide To Summer Flowers: Freesia 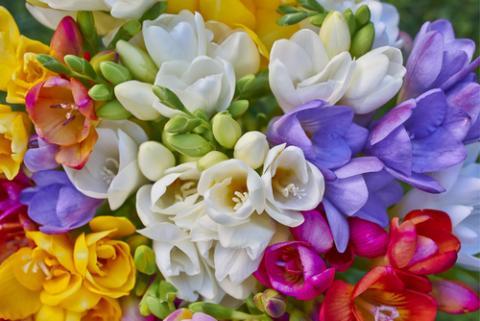 Freesia is a member of the family Iridaceae or Iris family of the genus Freesia Eckl. ex Klatt or freesia P. The United States Department of Agriculture (USDA) does not list this genus containing species. The plant is native to southern Africa and many biologists suggest the genus contains twenty species while others believe them to be varieties.  Freesia is named after Dr. Friedrich Heinrich Theodor Freese, a German physician. The plant was brought to Europe in the 18th century but was never correctly classified and faded into obscurity until the late 19th century where it was found growing in in the Botanic Gardens of Padua, Italy. The flower was traced back to Freese and by 1874 became a popular cultivated plant.

There are no known medicinal uses for freesia but their strong fragrance is used commercially as an ingredient in perfumes, bath additives, and scented oils. The oils are artificially made scented oils, used in vaporizers, oil burners, and as an ingredient in creating potpourri. Because of their long, straight stems, they are often used in floral arrangements.

Freesias are zygomorphic plants because the flowers grow along one side of the stem in a single row facing upward. This happens due to the way the stem grows, turning at a right angle at the base of the first flower and causing the stem to grow almost parallel with the ground. The stems grow to approximately fifteen-and-one-half inches in height, producing long, thin leaves that grow from the base of the stem to a length of about twelve inches. Freesia blossoms open sequentially and continue to open throughout their growing season. The flowers range in colors that include white, yellow, gold, orange, red, pink, mauve, purple, lavender, and two-tone. Their fragrance is determined by the color of the bloom, making a bouquet of freesia a chorus of aromas.

Growing Freesia in the Garden

To grow freesia, be sure to find an area that gets full sunlight with well-draining soil because the plant does not grow well in soggy soil. Prepare the bed with peat moss, compost, or decomposed manure and then place the bulbs two inches deep with the pointed end upward, spaced three inches apart. Once planting is done, water to settle the soil. In colder climates plant in fall so the roots can develop during the winter season, resulting in taller stems in the Spring. Once the plant blooms the flowers can be cut for bouquet use and after the growing season do not cut back the plant as the leaves will continue to feed the plant and strengthen the bulb for the next growing season. The leaves can be removed once the plant is dormant.

Freesias are an excellent container plant especially for the colder climate regions. They must be grown in well-draining containers that can be anything from a barrel to an urn. Place the container in full sunlight and plant bulbs two inches deep with the pointed end up and two inches apart. Freesia will bloom in approximately ten to twelve weeks. The plant needs to be watered to maintain moist soil.

Freesia will lend itself to bouquets and vase plants. It is best to cut the stems early in the morning to maintain moisture in the blooms. Take the flowers to the sink and place them in cool water and then make a second cut about an inch above the end of the stem making the cut on a slight angle; then place them immediately in a vase of water. It is advised to change the water daily or add floral preservatives if the water cannot be changed on a daily basis.