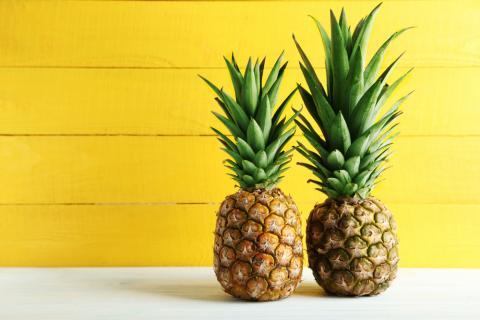 Pineapple is a member of the family Bromeliaceae or Bromeliad family of the genus Ananas Mill, also known as pineapple P, containing the species Ananas comosus (L.) Merr. or pineapple P.  The plant is native to Brazil where it is known as ananas, the Brazilian Tupi Indian word meaning "excellent fruit"—this term is used throughout the world.

Columbus brought the fruit to Europe and used it on board ship to prevent scurvy. The first European settlers called it pineapple because they thought it resembled pine cones. Pineapple in the American colonies was eaten preserved as a sweet meat and was too expensive to import until the establishment of the clipper ships. It was reported in the Virginia Gazette in the summer of 1752 that a shipment of seven dozen fresh pineapples had arrived in Williamsburg from New Providence in the Bahamas; however, the fruit was very expensive. Pineapple was brought to Hawaii by Captain James Cook in 1790 but it was not commercially grown until the steamship made trade profitable. In 1903, James Drummond Dole began canning the pineapple at Wahiawa and established his company in 1921.

Pineapple is a composite of fruitlets emerging from a central core and fused together. The spiny “eyes” that appear on the surface of the pineapple are the fruitlets. The pineapple has a wide, cylindrical shape with an outer skin that is green, yellow, or brown and topped with a crown of spiny, blue-green leaves. The flesh is yellow with a sweet and tart flavor and has a tender texture. Pineapple grows to about twelve inches in length and its crown is a third of the length of the fruit.

Pineapple is rich in nutrients, containing vitamins C, B1 (thiamin), B2 (riboflavin), B3 (niacin), B-6 (pyridoxine), B9 (folic acid), A, E, and K. The fruit is high in minerals that include calcium, iron, magnesium, phosphorus, potassium, sodium, and zinc. Other important nutrients are fatty acids, sugars, and fiber.

There are many health benefits in pineapple. The high vitamin C content and the enzyme bromelain present in the fruit help us maintain a healthy immune system by stimulating activity in white blood cells. It also reduces mucus and phlegm building up in the lungs which encourages a healthy pulmonary system. It is a factor in a healthy digestive system, preventing constipation, diarrhea, and irritable bowel syndrome (IBS). It can also be used to treat gout.

Other health benefits of pineapple include the prevention of cardiovascular diseases like stroke, the preservation of muscle mass, and the reduction of bone deterioration due to the presence of potassium. It improves fertility by increasing blood flow to the genital organs. Another health benefit is that it is an excellent alternative to chemotherapy in the treatment of cancers.

Growing pineapple is very easy: just take the crown and then start it to root by cutting away all flesh and scoring the stem until a ring of brown dots are seen. Peel off the bottom leaves and dry the stalk and plant it about an inch deep in a six to eight inch clay pot with a light, quick draining mixture like cactus potting soil. Keep the soil moist—it will take about one to three months for the stem to take root. As the leaves begin to grow from the center of the stalk the pineapple can be transplanted into a larger container. Because it is a bromeliad it is a slow growing plant and will not develop fruit for two to three years. In tropical climates it can be grown in the garden and in colder climates it makes an excellent container plant. The plant will mature in a year and will need a five gallon pot, and then it can be put out on the deck, patio, or in the garden in colder climates during the summer months.

How To Eat Pineapple

Pineapple is a versatile food that can be an ingredient in many recipes. To use fresh pineapple, remove the crown at the base where it meets the fruit, and then place the pineapple base down and slice off the skin, being sure to carve out the eyes. Once peeled, cut the fruit into quarters and remove the core; the fruit can be cut into desired pieces. Pineapple will stay fresh in the refrigerator for about five days. Pineapple can be used as an ingredient in salads, curries, smoothies, side dishes, and salsa recipes.