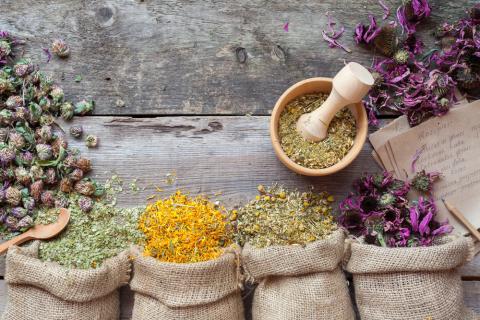 I’ll start by stating the obvious.  When struggling with panic attacks, the approach necessarily has to be a broad one encompassing a whole network of support:  A good therapist is helpful, nutrient-dense foods, mindfulness practice, physical activity, reaching out to loved ones and such.  Speaking from experience. Anxiety has been a life-long companion of sorts, but full-on panic attacks didn’t start until my early 30s. This was pre-herbalism for me so I went through a whole slew of “azepams,” each losing effect after a few weeks. Admittedly, that first prescription of lorezepam truly felt life-saving after a couple of expensive trips to the ER and no answers until the Physician Assistant figured out what was going on.

About 2-and-a-half years later, I had weaned off of the last of my pharm drug cocktail for anxiety and depression. By that point, the side effects were causing more problems than the meds seemed to be solving, and the occasional panic attack still happened even on the meds. (Usually when flying!) Around this time, I was at my first ever herb class, a medicine-making workshop, and an anxiety attack started kicking in. It was great timing, actually.  We were making pastilles with freshly dried Skullcap (Scutellaria lateriflora) and Vervain (Verbena officinalis), two herbs traditionally used—especially combined—for anxiety and tension.  I took a dose.  It was a revelation…I actually calmed down!

Since then, I’ve experimented with many remedies, because after a while, these stopped working as well.  Keep that in mind…sometimes you need to change up your formula. Many popular remedies simply don’t work for me.  Which brings up another point…we’re all a bit different: Different triggers, different wiring, different experiences, different biochemistry. So don’t get discouraged if the first herb you choose doesn’t work.  Introduce yourself to plants in between attacks to see if you can find a couple of calming allies to reach for in the moment.

Here are my three top herbs beyond Skullcap and Vervain that have either fended off an imminent anxiety attack or helped stop it once it’s gotten rolling.

This is my current go-to herb.  It is one of the few safe herbs that is capable of calming me and it also eases the heart palpitations that can either trigger a panic attack or may happen during a strong bout of anxiety or outright fear.  I take it in a daily formula but also reach for it as a “single” when needed.

This was the herb I initially carried with me when flying.  I’d start dosing on the way to the airport, and took a squirt every half hour or so until take-off (the scariest part of flying for me, other than turbulence).  Even holding the bottle during take-off or bumpy parts of the flight was comforting.  I eventually stopped using hops because it isn’t the best herb for folks also dealing with the blues.

Common names include Elephant’s Head, Lousewort, Parrot’s Beak and others, depending on the species. This one is a bit harder to find commercially, but there are at least a couple of reliable purveyors online. Because I’m blessed to live where multiple Pedicularis species grow, I dry them and use in a smoking blend with other calming herbs like Mullein Leaf and Rose. Yes, smoking anything is not generally good for the lungs. But it is a rapid way to get the herbs into one’s system. Start with just a few drops with this herb for yourself or anyone else…it can be very strong for some people and very gentle for others.  Better to ease into it than slam a sensitive soul with a high dose, only to “loop them out.”

Making tea, if you can focus enough to do so, can help with grounding, though some of my favorite “panic button” herbs are seriously bitter and, thus, better as a liquid extract. Plus, liquid extracts are more portable when you’re out and about.  As with my pharm meds before, simply carrying around my bottle of herbs would help keep me calm.  Note that when using liquid extracts, experiment with drop dosing at first…for some folks, this is enough.  For others of us, a larger dose may be necessary.

Essential oils are fast-acting allies for support.  Our scent receptors are hooked up to a nerve that runs directly to the limbic system, the part of the brain that regulates fear and other emotions.  After sniffing them, essential oils also enter into circulation, thereby providing relaxing effects elsewhere in the body…easing tense muscles, for example.

A great way to use oils is to try one or to create a blend that reminds you of a happy moment or memory…a grandmother’s flower garden or a cedar chest or a pie baking in your aunt’s kitchen. Or, simply experiment with oils to find those that are comforting for you.  A discreet way to do a little aromatherapy in public without stinking everyone else out is to make a small inhaler that you can carry around. For example, add 8-10 drops of oil to a teaspoon of coarse sea salt and stick it in a small, screw top vial.  Make sure the salt is coarse enough that you don’t inadvertently sniff the salt up your nose (ask me how I know this…)!

As soon as I notice any uneasiness, I take four deep sniffs…rotating back and forth holding the vial to each nostril (just a ritual that helps me for grounding).  This can be repeated again every 10-15 minutes for up to an hour.  Then, repeat every hour or two if needed.   When going into a situation that’s a potential trigger, start ahead of time—just like you would with your calming herb(s). By the way, you can use both an herbal formula as well as an essential oil inhaler.

Here are the oils I most often reach for when “spun out”:

This one is proof that you don’t necessarily have to like a scent for it to be effective. (That said, it’s not a bad idea to actually like the scent of the oil!). I find ylang ylang, even the good quality ones, to be cloying, but it’s an effective sedative for me and is often a part of my “fear of flying” blend.

This very calming oil has a heavy, earthy, grounding scent.  I like to use it combined with ylang ylang, maybe tossing in some lavender (Lavandula angustifolia) as well for the scent and effects.

This one is kind of like sniffing a ridiculously strong pint of IPA. Though calming, hops is contraindicated for folks with the blues, and I tend to avoid it for folks with “estrogen dominance.”

Not only do citrus oils smell juicy and uplifting, they’re a favorite of aromatherapists for their calming and uplifting effects.  Bergamot is just one of the multiple citrus oils that has been studied for anxiety-reducing effects.  Citrus oils can be a great, uplifting addition to some of the strongly sedating and stronger smelling oils like manuka or hops.

One of my favorite all-time scents!  And one of the most chemically-complex. Rose has traditionally been turned to for mood and this is being backed up by research showing that inhalation of rose can temporarily reduce breath rate, pulse rate, and blood pressure. It’s expensive and a little goes a long way.  Rose blends well with ylang ylang (another strongly scented oil) or with bergamot.

Note that it doesn’t really make sense to throw in botanicals if you’re already on pharm drugs for mood support.  And, to do so might result in unwanted interactions.  Ask the question of what best serves you. For some folks, their mood medication may actually be life-sustaining and not a good idea to mess with if it’s helping.  On the other hand, some folks like me find that the various meds aren’t quite doing the trick, even after much doctor-guided experimentation.  However, if deciding to taper off of a medication, a team made up of your doctor and a trained herbalist/aromatherapist is the way to consider if wanting to use botanicals to ease the transition and move forward. Don’t go it alone.

One last note before signing off.  Something many of us have found is that specific foods may have a profound impact on mood.  An elimination diet may help you pinpoint trigger foods that may exacerbate feelings of tension, anxiety, or fear.