Your Guide To Summer Flowers: Amaranth 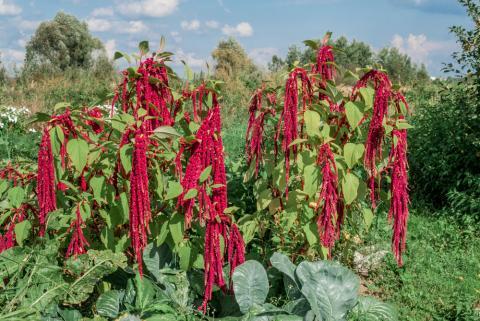 Love-lies-bleeding flowers belong to the family Amaranthaceae, commonly known as the Amaranth family of the genus Amaranthus L. or pigweed P. There are forty-nine species in the genus that includes the Amaranthus caudatus L., also known as foxtail amaranth P. The plant is native to the tropical regions throughout the world and there is well documented use of it as a staple food for the native peoples for millennia. The Aztec people called it “kiwicha,” pronounced kee-wee-cha. The scientific name is derived from the Greek language; its genus nomenclature “amarantos” means unfading and its species name is defined as “with a tail.” The common name comes from the appearance of the tiny blood red petals.  The seeds are rich in nutrients and were used to grind into flour for bread and pastries. It was an important crop for the Aztecs, who referred to it as the “golden grain of the gods,” but the fields and seeds were destroyed by the Spanish Conquistadors. The flower became popular in Victorian England as a decorative addition to the garden.

Love-lies-bleeding flowers are unique in appearance.

Love-lies-bleeding is an annual flower that is also referred to as the tassel flower. The multiple blooms are narrow in shape and grow from a main slender stem before drooping into a tassel cascade that averages approximately twelve inches in length. The blooms grow in colors of red and yellow-green flowers. They produce light green oval leaves that grow to about six inches in length. The plant can reach up to four feet high.

Love-lies-bleeding flowers are a decorative addition to a garden and should be planted in well-draining soil; they do well in full sunlight or partial shade. Seeds can be started indoors six to eight weeks before the last frost but the flower does not bloom until three months after sowing—usually from July to the first frost. When planting from seed they should be spaced from twelve to eighteen inches apart, depending on the variety. Seeds may be collected for the next planting season. They have no major predator or disease problems but do attract aphids. They tend to develop root rot if planted in soil that does not drain well.

Love-lies-bleeding is an excellent flower to attract pollinators.

Love-lies-bleeding is a good flower to add to a butterfly garden. Its long-lasting blooms are attractive to many pollinators. This addition to a garden will help to pollinate other plants and assure a productive garden for the future.

Love-lies-bleeding is a lovely addition as a decorative plant in many outdoor locations.

Love-lies-bleeding is a versatile decorative plant that does well when planted in hanging baskets to accent a patio or porch and to add interest; they can be planted in a variety of containers. They are an attractive border plant and add an interesting accent along garden paths or walkways.

The love-lies-bleeding plant has multiple uses as most of the plant is edible. The seeds are prepared and eaten as cereal grain and can be ground into flour for baking. They are also a substitute for popcorn and one recipe toasts them then mixes them with honey or molasses as a confection known in Mexico as “alegria.” The seeds can also be sprouted to use in salads or sandwiches. The leaves are usually cooked like spinach.

The healing properties of Love-lies-bleeding

There are several nutrients in love-lies-bleeding seeds that are beneficial to maintaining a healthy body. They are rich in calcium and iron and have three times as much fiber as wheat. Calcium has many healing qualities that include skeletal and dental health, while iron maintains the red blood cells which is essential in carrying oxygen throughout the body. Its high levels of fiber contribute to a healthy digestive system.