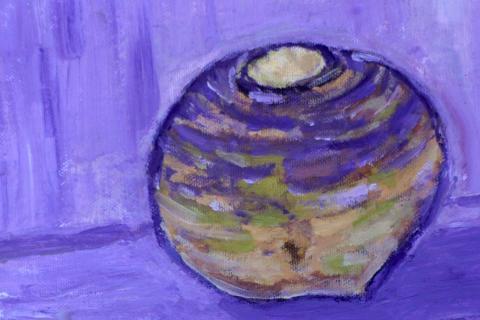 Swedes are closely related to rutabagas and turnips, who are fellow members of the cabbage family. They are a relatively new plant cultivated in Sweden in the 15th century. They were introduced in Scotland in the 18th century, where a swede was known as a Swedish turnip and called a “neep.” It was often served pureed or mashed as a side dish with haggis. By the late 18th century, swedes became a European crop and they were introduced in the United States in the early 19th century. Recipes instructed to peel off the skin and boil them, much like cabbage, and then serve them mashed with butter and pepper. Today swedes along with rutabaga are considered a dangerous vegetable because two-thirds of kitchen injures are found to be caused by cuts while preparing vegetables like swedes, turnips, rutabaga, and pumpkins. However, the plant is easier to grown than turnips and is available to pick in cold weather. They are ready to harvest in four months and can be picked as needed. Swedes are packed with nutrients like vitamins C and B6, and minerals like iron and sodium, along with folate and protein.

The Appearance of Swedes

Though considered a root vegetable, swedes are really the layered base of the plant’s stem and have ridge scars that circle at the top of the vegetable. Wondering how to tell the difference between swedes and turnips? Turnips are the size of a golf ball and have a smooth, white skin with a purple top and white flesh, while swedes are larger, about the size of a shoe, with rough, creamy white and purple skin and a distinctive collar that displays leaf scars. Additionally, its flesh is yellow-orange.

Swedes are easier to grow than turnips and do well in any prepared soil, including sandy soil as long as it drains well. They do not like fresh compost or manure as fertilizer when sowing the seeds but do need trace elements, so plant food or seaweed spray is recommended. Lack of these elements can produce swedes that are tasteless and bitter with brown flesh. It is important to note that swedes do not like to be transplanted. They grow on top of the ground and can be ready to harvest in three to four months. It is best to pick them as needed and whether small or large they are a delicious addition to recipes. They can be stored much like potatoes.

1. Swedes are highly nutritional—even more so than their cousins rutabaga and turnips. They contain vitamins A, B1, B6, and C. Their mineral content includes calcium, magnesium, manganese, phosphorous, and potassium. Other important nutrients found in swedes are dietary fiber and thiamin.

2. For preventing and decreasing the risk of contracting type-2 diabetes, swedes are an excellent addition to the diet. They have fewer carbohydrates than potatoes, implementing the acceleration of the breaking down of simple sugars, thus balancing the glucose and insulin levels in the body. Swedes high fiber content also aids in a healthy digestive system, promoting regularity, preventing constipation, and lowering the risk of developing colon cancer.

3. Swedes are a significant food for bone health because of their calcium and magnesium content. These two minerals are essential for maintaining a strong healthy skeletal system. Studies have suggested that swedes can reduce the incidence and severity of epileptic seizures, as well as migraine headaches.

4. Other health benefits of swedes include reducing the growth of cancerous tumors because of their vitamin C properties and the presence of carotene which destroys free radicals. Both qualities help swedes prevent premature ageing. Vitamin C strengthens the immune system by stimulating the production of white blood corpuscles and it’s also a factor in the production of collagen which heals the skin, muscles, and blood vessels.