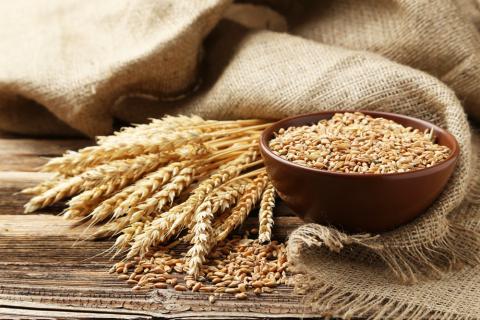 Wheat is a member of the family Poaceae ⁄ Gramineae or Grass family of the genus Triticum L. or wheat containing the species Triticum aestivum L. or common wheat. The plant is native to southwestern Asia and has been eaten for approximately 12,000 years. Wheat arrived in the western hemisphere in the late 15th century with Christopher Columbus and the pilgrims but it was not until the 19th century that the plant was cultivated. Russian immigrants brought hardy species and settled in the region that is now Kansas. Wheat was not a successful crop for the colonists and those who settled in Virginia planted tobacco, a more profitable crop. In 1718 the Company of the West planted wheat in the Mississippi Valley, resulting in an important American crop. It became an even more important crop during the Civil War when the mechanized northern farmers were able to efficiently harvest the crop to feed the Union troops.

Wheat is a moderately tall annual grass and is a very complex plant. It produces flat, blade leaves and a terminal floral spike that grows perfect flowers. The stems produced by grasses are known as tillers; wheat tillers produce a hollow auxiliary stem known as a culm. The culm of the wheat plant is leafy in appearance and is made up of five to seven nodes from which emerge three to four foliage leaves; the topmost leaf is known as the flag leaf. The culms produce a composite spike that is called a spikelet that emerges from a main axis or rachis, each having its own short internode. The spikelet is a compact reproductive part of the plant that is made up of two sterile bracts known as glumes that contain two to five florets produced on a short axis called a rachilla. They contain three stamens, a large anther, and a pistil with only one ovary containing a single ovule, two styles that have two branching plumose stigmas emerging at the end of the style. Wheat is divided into two groups, summer and winter, and within these two classifications and depending on the texture they are either hard or soft. Wheat can be red or white with a touch of amber in its hue. Whole wheat is unrefined and has not been stripped of its essential nutrients.

Wheat is a nutrient-rich food that has been a staple food for millennia. Its mineral content includes calcium, magnesium, potassium, sulfur, zinc, manganese, cobalt, and copper. It also has vitamins A, B, D, E, and K. Whole wheat is the entire grain containing all the nutrients. Once the grain is processed it loses many of its nutrients. Unprocessed wheat has been shown to lower the risk of developing type 2 diabetes and cardiovascular diseases as well as reduce chronic inflammation; it also helps in brain functions, inhibiting the development of dementia and Alzheimer’s disease. Wheat is a high fiber food that keeps the digestive system healthy and reduces the risk of developing gallstones in women, colon cancer in men, and asthma in children.

How To Grow Wheat

Growing wheat can be an interesting addition to the vegetable garden. In an area twenty feet wide and fifty feet across planting six pounds of wheat will yield fifty pounds of grain. A crop of wheat can be grown in a garden plot that is six feet wide and twenty-five feet in length.  Winter wheat is planted in the fall and harvested in mid-May in warmer climates and late July in cooler regions. Spring wheat is planted in the spring and harvested in autumn. In fall planting sow six to eight weeks before the first frost. Spring planting should be done as soon as the ground can be worked. Plant seeds by way of a crank seeder or scatter them evenly around the plot then cover the seed area with a rake or rototiller with two to two-and-one-half inches of soil for winter wheat and one to one-and-one half inches for spring wheat. When the stalks turn from green to beige and the tops of the stalks turn toward the ground and are heavy with grain the tips can be snipped off. Then create sheaves by tightly binding the harvested wheat about twelve to fourteen inches in diameter or wide enough to comfortably fit in the hand. Cure the grain in an area that is safe from animals and stack them vertically in a dry location. When the grains are hard it is time to thrash the grain, removing the chaff from the straw. One way is to beat the sheaves into a clean, large garbage can.

While organic whole wheat remains a healthy food, in the mid-20th century new breeding techniques combined with modern milling reversed the health benefits of wheat and created the “gluten-free” trend. Wheat rich in gluten has been a staple food for millennia until the advent of processed foods, pesticides, and a polluted environment. The healthy alternative is whole grain organic wheat foods, especially during the winter. Baking bread uses whole wheat, salt, water, and organic starter and should take three days to bake.  Hard and soft are the two basic groups of wheat that are used in foods. Hard wheats are higher in protein and used in making breads and quick breads. Soft wheat has a lower protein content and is the main ingredient in crackers, pastries, and flat breads. Noodles can be made with either hard or soft wheat. Some examples of foods made with wheat are matzo, tortillas, pretzels, and couscous.