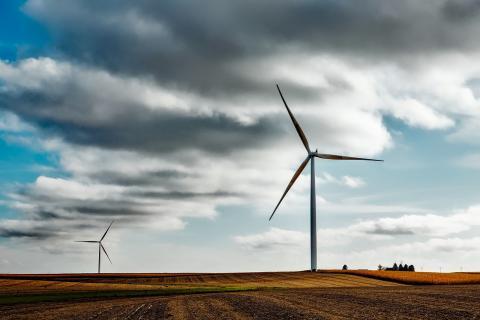 "Jump in there with both feet."

Richard Branson, director of the virgin group and proponent of environmental entrepreneurism, explained that clean energy is essentially the next big thing. The Climate Reality Project interviewed Branson as part of their 24-hour live event broadcast across social media in December 2017.

We've been hearing that line for the last decade though.

“Green energy, green business is the next big thing!”

So what happened since the wide endorsement of environmental entrepreneurship?

Well, the simplest explanation is, as our favorite bald amazon founder, Jeff Bezos, has said: "I've noticed all overnight successes take about 10 years."  In the case of clean tech and green entrepreneurship, that clock is coming up on about 15 years, considering we've been talking about this since the early 2000s.  But maybe that's okay, or, at the very least, necessary. Obviously, the importance of shifting the way in which our species consumes and creates is of paramount importance. If nothing else, just looking at how much difficulty we're having with restoring power to Puerto Rico, we can start to draw some conclusions about how ill-prepared we really are to handle the challenges that an imbalanced energy and resource cycle are going to present to us in just the next 10 years.

Back to Jeff Bezos, who, while not as revered as Steve Jobs (yet), is still a nonchalant leader of the entrepreneurial world. In the same talk at the Internet Association Gala in 2017, he explains that Amazon's ability to thrive on the scale that it has (despite it being based on physical versus more scalable digital products) is the fact that all the systems that supported it were already in place upon its inception. The post office, the internet, and E-commerce were all functioning and established when he assembled them into a single platform. That is precisely what has been happening for the world of green business since we first started hearing about it.

Despite the fact that presently, we are working against an administration that, if it's not busy trying to disassemble the Environmental Protection Agency, then it's probably dicing up national monuments of major environmental significance, things are still falling into place: the global social attitude is changing, global scale market sentiment is quickly shifting (thanks Elon), and legislation is actually enabling this change as well (yes, even legislation). Though arguably 15 years ago would have been a prime time to jump into environmental entrepreneurism—time is precious and an innovative edge could be incredibly beneficial today—the odds are certainly a lot more in your favor if you're just starting now.

This is what the breakdown of the aforementioned factors actually looks like:

Social attitude is an incredibly important part of this picture. Though investors and, on a larger scale, venture capitalists are always trying to be ahead of the “right” curve, when it's apparent that a market has momentum, people go there.

“When you’re offered a seat on a rocket ship, don’t ask what seat—just get on.” These words of advice were given by then CEO of Google, Eric Schmidt, to Sheryl Sandberg, current COO of Facebook, just before her tech career took off. These words have echoed through the minds of an entire generation of entrepreneurs.

Market sentiment is the other main component to this whole picture. If you were to take the necessary pre-startup pilgrimage to the offices of potential investors, seeking funding for your brilliant green tech business in 2001, your rate of success would have been drastically lower, if existent at all. However, in the new era of Silicon Valley think tanks, the starry-eyed viewership of movies like The Social Network and overall infatuation with buzzwords like “scalable,” “branding,” and “disruptive,” are far too trendy to allow for many of the economic “powers that be” to even think about any other investments. The success of companies like SolarCity and technologies like autonomous transportation has helped dissolve the nebulous dogma of fear around hard asset (non-tech oriented) businesses.

Finally, enabling this whole movement is legislation. On June 1, 2017, an announcement, ironically emanating from the White House Rose Garden, explained that the United States would be withdrawing from the Paris Agreement. The Paris Agreement “for the first time—brings all nations into a common cause to undertake ambitious efforts to combat climate change and adapt to its effects.” While the current administration in the US is certainly not working towards bigger and better environmental policy, Obama-era legislation and the coalition of 15 states that have come out in support of the Paris Agreement are still providing legal incentive for environmentally conscious business. Beyond that, as solar energy and other green conscious businesses gain momentum, the collective economic support for lobbying efforts is growing as well.

Though, if you’ve been paying attention, climate change is about to start obviously affecting the whole world in drastically more significant ways. The tool kit available for those working towards a solution is expanding. Al Gore is no longer kooky and alternative (anyone else finding themselves wistfully rehashing the 2000 election in their head?), we have supporting intellectual superpowers like the Musk brothers, and eating organic is suddenly wildly fashionable. These are all only pieces of the puzzle, but they are signs of a much greater change in our world. While this late in the game it will take nothing short of a miracle for us to solve the problems we’ve created, considering the complexity of our global society, miracles are what we do best. Again, for any thinking about engaging in some green entrepreneurism, now is the time. Jump in with both feet, don’t look back, and know that you’re not jumping alone. Now is a better time than ever to build, grow, and create. The rest of the world will have your back, because, really, it has to.