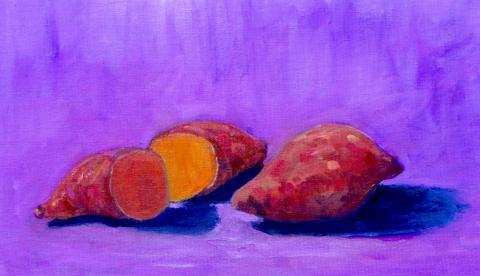 The sweet potato is a member of the morning glory family and is native to Central and South America. The plant was cultivated by ancient peoples of the area as far back as the Stone Age. It was brought to Europe by Christopher Columbus during his first voyage in 1492. The Spanish and Portuguese explorers introduced sweet potatoes to Asia during the late16th century and in the next two centuries the plant could be found in Africa and Latin America. The sweet potato, which is correctly spelled as one word but popularly spelled as two words, is in a separate family from the yam—meaning they are not related and are two separate plants. The modern commercial market intertwined the two in the mid-20th century when they marketed different species and used the term yam, though any yam sold in the United States is a sweet potato. The United States Department of Agriculture (USDA) requires that all yams be labeled with the nomenclature sweet potato. While sweet potatoes are readily available in supermarkets and health food stores yams are mainly found in international food markets that specialize in foods that are grown in tropical climates.

The sweet potato comes in many varieties. Most familiar is the orange fleshed with orange-tinged skin and long, tubular shape with tapered ends. Sweet potatoes also can be more round like a potato and grow in hues of white, purple, cream, pink, and yellow. Those marketed with the term “gold” or “red” are the orange variety. The sweet potato in America is often prepared as a sweet side dish. One popular preparation is the candied sweet potato. It is also mashed with marshmallows added to the recipe or made into a custard. Aside from a delicious sweet side dish the sweet potato is high in vitamins A, B5, and B6, as well as thiamin, niacin, and riboflavin. Its orange hue comes from the large amounts of carotenoids. It also contains potassium, calcium, and iron and is a source of vegetable protein.

This nutrient-rich food is beneficial to the diet for the following reasons:

1. Sweet potatoes are excellent for cardiovascular health because they have a high concentration of vitamin B6. These vitamins break down homocysteine, the substance that contributes to the hardening of blood vessels and arteries. Sweet potatoes are also rich in potassium, which maintains fluid balance, therefore helping to lower blood pressure and regulate the heartbeat.

2. Sweet potatoes grow in several colors: the two most common are the orange flesh and the purple flesh. The orange flesh is especially beneficial to children because it is rich in beta-carotene, enabling the body to maintain a healthy level of vitamin A. The purple flesh sweet potato contains anti-inflammatory and antioxidant substances that are most effective in the digestive system and can lower the risk of heavy metals and free radicals in the body.

3. It is suggested that the way sweet potatoes are cooked affects the beneficial nutrients they contain. It has been found that boiling or steaming maintains these nutrients better than roasting them and therefore more effectively maintains blood sugar levels. Steaming is faster (taking only seven minutes when cut in half inch slices) and keeps the nutrients intact.

4. Sweet potatoes help lower the risk of type-2 diabetes by balancing blood sugar levels. Though a starchy food, they have a low glycemic index, allowing the sugar to slowly release in the bloodstream. Because of this fact the incidents of blood sugar spikes are greatly reduced.

5. Sweet potatoes have been found to lower the risk of the development of breast cancer in premenopausal women and ovarian cancer in postmenopausal women. The purple varieties are even more effective, reducing the incidents of other cancers as well.

The sweet potato has been a staple food for the Native Peoples of Central and South America for millennia and was readily found growing in parts of North America. Though both are root vegetables, sweet potatoes and yams are members of two different families, and yams are native to West Africa and Asia. Sweet potatoes are rich in nutrients that have many healing qualities and lower the risk of the body developing many diseases and illnesses. Steaming or boiling sweet potatoes preserves these nutrients more so than other cooking methods. Sweet potatoes can be a delicious and nutritious addition to any meal.