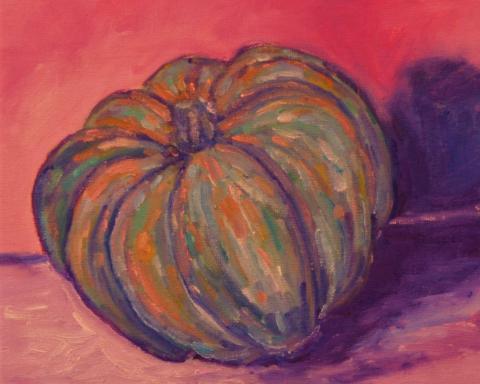 Squash (the winter species) is native to Central America and evolved around the same time as flowering plants, approximately 350 million years ago. However, it was not until 13,000 B.C.E. that man began using squash to make cups, containers, and floats for fishing nets. It was one of the earliest cultivated plants, first farmed in 10,000 B.C.E., but because of its bitter taste was not used as a food source until several thousands of years later when squash was bred to have a sweeter taste. The summer variety was also found in North America, primarily in the central, southern regions of what is now the United States and Mexico where it continues to grow in the wild. Today these species can be found worldwide. The winter squash was brought to Europe by Christopher Columbus, where it was distributed throughout the world by Portuguese and Spanish explorers. Today the largest producers of winter squash are China, Japan, Romania, Turkey, Italy, Egypt, and Argentina.

The name squash is derived from the Native American Massachuset word “askutasquash” which means "eaten raw or uncooked," as they ate summer squashes as picked. Squashes come in two kinds: summer squash and winter squash. Both are grown in summer but summer squash is more fragile and must be used quickly. There are four basic varieties: crookneck, zucchini that can be green or yellow, straight neck, and scallop (also known as “patty pan”). Summer squash has soft skin that is edible and the flesh has a high water content with a mild flavor. The seeds of the summer squash are rich in vitamins A and C and niacin. Winter squash is harvested in the fall.  They have thick, hard non-edible skins like pumpkins, butternut squash, and acorn squash. They take longer to cook and can be stored throughout the winter, making them a valuable staple. Gradually the plants migrated north as Native Peoples brought them to their territories (like what is now Arizona and the Mississippi Valley).

There are many interesting facts and benefits regarding squash:

1. Squashes are rich in nutrients, containing a large amount of vitamin A and carotene, a significant amount of vitamins C, E, and B6, niacin, thiamin, pantothenic acid, and folate. They also have a high content of minerals that include magnesium, potassium, manganese, copper, phosphorous, calcium, and iron. This makes it a valuable food as an anti-inflammatory and beneficial for reducing the risks of heart disease and cancer, as well as promoting ocular health.

2. Squashes are an excellent addition to a weight loss diet as they are low in calories and can be substituted for starchy vegetables like sweet potatoes. They aid digestion, promoting a healthy digestive tract because of their high fiber content. Squashes help to regulate blood sugars, preventing the development of type-2 diabetes.

3. Squash seeds have been found to protect the body from parasites, microbes, and fungus that includes tapeworms and intestinal parasites. Squash seeds are rich in omega-3 fatty acids and have a high nutritional value, and winter squash seeds can be eaten as snacks. They can be roasted on a cookie sheet in low heat, used as a garnish in salads, or included in recipes.

4. Summer squashes come in four varieties: zucchini-type, straight-neck, crookneck, and scallop-type (also called "patty pan") Zucchini-type squashes have a rich green skin and are usually solid in color but may also be striped, speckled, light green, or yellow. Straight-neck squashes are usually a deep yellow color; crookneck squashes are also yellow but they bend at the neck region where the hook is narrower than the body. The scallop or patty pan squashes are a disk shape with scalloped edges and can be found in white, green, or yellow colors.

5. There are many varieties of winter squashes; all are rich in nutrition with edible seeds and a tough outer skin with flesh that must be cooked for optimum flavor. There are many kinds of winter squashes that can be found in the supermarkets, health food stores, and specialty food stores. The butternut is a large pear-shaped fruit with cream colored skin and deep orange flesh that has a sweet flavor. The acorn squash has a small round shape with visible sections with dark green skin speckled with orange patches. It has pale yellow-orange flesh that combines sweet, nutty, and peppery flavors. Turban squash is shaped like a turban with an orange body and colorful top that is either speckled or striped with orange-yellow flesh that has a hazelnut taste.

Squashes are a healthy and popular staple throughout the world that originated in North America. Native people ate the seeds and used them to make bowls, plates, and containers. The two types of squashes both summer and winter are packed with nutrition and are very beneficial to maintaining a healthy body. While the entire summer squash is edible, the skin of winter squash is not—although many people enjoy adding the flower to their recipes. Today squashes can be found in colorful displays in the produce department of all kinds of food markets.