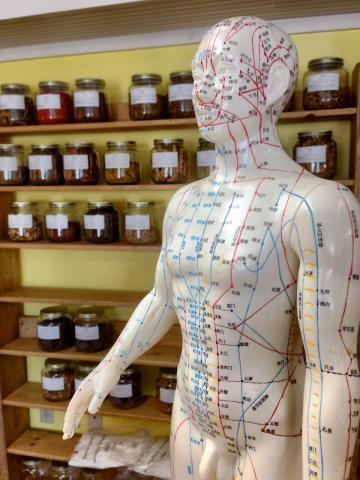 Acupuncture entered the mainstream years ago, but I’ve been slow to embrace it. Where I used to live on the east coast, sessions cost upwards of $100, so I looked for cheaper ways to manage my fatigue and insomnia.

Although a scan of the studies on PubMed indicates that acupuncture is an effective treatment for health issues ranging from headaches and back pain to depression and insomnia, insurance often doesn’t cover it, and many people need more than one session to see symptoms abate. In the past, these factors have eliminated acupuncture as a viable treatment option for many.

Group acupuncture is here to change that.

What Is Group Acupuncture?

Community, or group, acupuncture has become increasingly popular due to its affordability, and some people actually believe the energy from the group therapy dynamic aids in the healing process. Treating multiple people at once in the same room allows clinics to charge as little as $15 per session. At the clinic in my town in California, a session costs between $30 and $50.

Which means there’s finally a low-cost way for me to see how an acupuncture treatment will affect my sleep, energy levels, and headaches.

How Does Group Acupuncture Work?

The theory behind acupuncture, a therapy of traditional Chinese medicine, is that patterns of energy flow in the body (qi or chi) are essential to good health. Disturbances in these patterns can cause pain and disease, and the idea is that stimulating certain points in the body can remove blockages and restore the flow of energy.

What Can I Expect?

In a waiting room decorated with meridian body map posters, I filled out a health questionnaire asking about illnesses, surgeries, medications, and my primary reasons for seeking treatment. Before I went into the treatment room, the acupuncturist told me not to worry if I fell asleep on the table—because acupuncture can increase your theta brainwaves, the sleep you get during a treatment can be more rejuvenating than a regular night’s sleep.

Typically, treatment spaces are quiet, and cell phone use and talking above a whisper are discouraged. In my treatment room there were four tables, or “beds,” and two chairs, but some community spaces treat up to 36 people at once.

When I entered, there were two women already in the midst of their treatments, and I silently chose a bed. Because of the group setting, everyone remains clothed, so I wore loose clothing that allowed the acupuncturist access to my legs below the knee and arms below the elbow.

After taking my pulse and checking my tongue (it was purple, an indication of stagnant energy), the acupuncturist instructed me to exhale as she inserted each needle, 17 in all, in my feet, legs, arms, the webbing between my thumbs and index fingers, my hairline, forehead, and five in my left ear. (According to Acupuncture Today, there’s debate over which ear to treat, but some authorities advise treating the left ear of women and the right of men.)

I actually found that being among other people lowered my anxiety about getting pricked for the first time. I didn’t sleep during my 45 minutes on the table, but focused on my breath, making the experience a mini-meditation (which the acupuncturist told me can heighten the effects of the treatment). My companions were quiet, and the only sound in the room was the music that could have been the background track of an Enya song.

I didn’t feel anything at all when the needles were inserted into my arms and legs. At the hairline and in the ear I felt a slight pinch, but the sensation subsided almost immediately.

About halfway through the session, the four needles in my head started to throb and I developed a headache, which apparently is uncommon. Also potentially alarming, when the acupuncturist removed all the needles, one spot in my ear bled a little. The acupuncturist explained that bleeding therapy is a common traditional Chinese medicine technique, and that bleeding, though not the goal of acupuncture, can add to its benefits.

A fear of needles is normal, and practitioners see it all the time. Let your acupuncturist know if you’re anxious.

Where Can I Find a Community Acupuncture Center Near Me?

The People’s Organization of Community Acupuncture (POCA) provides a database of over 200 clinics in North America and Europe. And there’s always trusty Google, which is how I found my local practitioner.

Insomnia is a tough beast to subdue, so I plan on continuing my acupuncture treatments until I see improvement in my sleep patterns. My acupuncturist recommended I come weekly for three months, a schedule that would have been out of the question at a private rate, but is finally feasible with the popularity of group sessions.