Your Guide to Summer Flowers: Nasturtiums 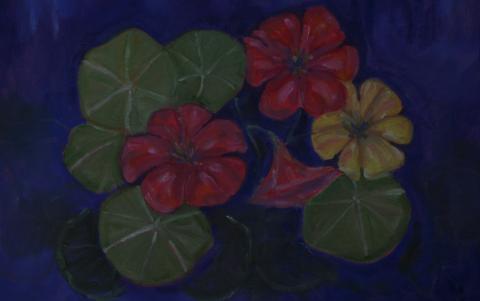 The nasturtium is a member of the mustard family known as Brassicaceae, which contains five species. It is native to South America and brought to Europe by the Spanish conquistadors at the end of the 15th century. By the 17th century, Dutch and Spanish herbalists began developing another species and shared the seeds with British and other European botanists. The flower became popular throughout Europe and was called the Indian Cress because it was thought to have the same flavor as watercress. French King Louis XIV had them planted in his garden which increased the popularity of the flower. Nasturtiums were planted in Thomas Jefferson’s garden starting in 1774 and throughout the 19th and 20th centuries breeders began introducing other varieties. From the dawn of history they have been considered a flower, a fruit, an herb, and a vegetable. Since before the Spanish invasion the people of South America used the plant as a healing herb and it was an important plant in every home and has been used as an edible plant in salads. Nasturtiums are easily grown and an ideal plant for children learning to garden.

Nasturtiums are a full growing plant with bright green leaves and brilliant colored flowers that accent the foliage. The leaves have a rounded shape much like lilies while some varieties are variegated and the flowers are funnel shaped with a spur on the underside of the bloom. The flowers have rich, bright colors that include yellows and oranges, pink, red and mahogany while some varieties grow subtle hues of buttery yellow and cream. There are three main types of plants: trailing, climbing, and bush. The bush varieties grow to approximately twelve inches in height and have about an eighteen-inch parameter. The trailing plants reach from three to four feet in length and the climbing varieties can grow to ten feet. All nasturtiums are completely edible -- the seed, stem, and flowers are included in recipes and have been used as a healing herb for centuries. These plants also have an insect repellent quality.

Nasturtiums grown in both full and partial sunlight but bloom better in full sunlight -- though they do not like extreme heat. They blossom from spring to late summer and into early fall in cooler climates. Due to their extreme foliage it is recommended to plant the newer varieties because they have been bred to hold their flowers above the foliage like the Alaska series that are a dwarf bush plant. Other bush varieties include the Jewel and Peach Melba series and can fill in gaps and be used to accent a color theme. The Canary Creeper is a vining variety to add a background to the garden or plant in containers for a patio decor.

How to Plant, Grow and Maintain Nasturtiums

It is always better to make a garden plan before you spend money on seeds and other garden needs. Nasturtiums are started from seed and can be planted directly into the garden after the threat of frost is gone for the season. If starting indoors plant from two to four weeks before the end of the cold season in peat or paper pots to reduce transplant shock. Be sure to scratch the seeds with a file to stimulate germination. The plants should be placed approximately three to four inches beneath plant lights and need about eight hours without light.  When planting in the garden from seed, they need to be planted in a well ventilated area about half-an-inch deep and ten to twelve inches apart; they prefer poorer soil so fertilizing is not required – in fact, over fertilizing reduces the production of blooms. The sprouts appear in approximately seven to ten days. Until the plants have become established they need protection from wind and direct, hot sunlight. These plants almost care for themselves; they only need regular watering but not too much, and dead blossoms should be removed. They also are a good plant for vegetable gardens, attracting pollinators like bees, butterflies, and hummingbirds.

Nasturtiums have a peppery flavor and are used in salads and as a garnish in many meat and vegetarian recipes. The seeds are used as capers in many dishes. They are a healing plant with a high vitamin C content and an excellent cold remedy. As an antibiotic, nasturtium is very effective at relieving the symptoms of and curing the flu. For centuries nasturtiums were used to treat renal diseases and prevent scurvy. However, pregnant women should avoid the nasturtium because it induces the menstrual cycle and can cause a miscarriage.

Nasturtiums are an ancient flower native to Peru and have been used as a salad garnish and an herb in many recipes, adding a peppery accent to the dish, as well as acting as a substitute for capers. They have always been a garden favorite with their full foliage and bright blossoms. They require minimum care and adapt to both outdoor and indoor décor with a selection of colors in the red and yellow spectrums. There are many varieties, each providing a specific place in the garden, and they complement other flowering plants.