Why Spring Water is Better–And How to Find It 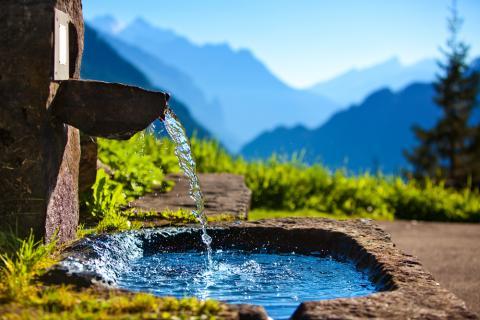 Water permeates all facets (and faucets – pun intended) of our lives: from what we drink, to how we bathe, to where we gather to swim, kayak, ride boats, and even travel. We’ve all heard familiar phrases like “drink half your body weight in ounces per day,” and “eight cups of water per day is the minimum of what you need,” but few of us ever bother to take a look at our water.

Yes, it can be found in a well, reservoir, tap, or bottle, but few of us are familiar with the actual source: springs.

Spring water is, in many ways, healthier than the distilled, “purified” water from our city’s water supply or from the 24-pack of bottled water from the supermarket (not to mention the environmental impacts of plastic bottles.)

Spring water is often the purest choice, since you’re getting your water straight from the source. While bottled water may make certain claims, there’s no guarantee of the water quality. A four year-study that was published in 1999 found that more than 25% of bottled water is from the tap–current estimates sit closer to 50%. Not to mention, there are ecological and human rights issues to consider, too. A Mother Jones article from 2016 pointed to the fact that most bottled water comes from drought-stricken regions like Southern California.

Then there’s the problem of tap water. The Scientific American discussed a three-year study in which 200 unregulated chemicals–including weed killers, industrial solvents, refrigerants, and even rock fuel–were found in the tap water of 45 states around the country. Many decide to opt out of tap water because of known-additions, like fluoride, which have the potential to cause brain, heart, and bone issues without preventing the previously claimed tooth decay prevention.

By definition, spring water comes from an underground source in which water naturally rises to the surface. For thousands of years, this was the source of our water. Most recently, it has come back into the spotlight following the rise of a website called FindaSpring.com, which invites users to input their location to find nearby springs. Within my location, for example, there are three sources, two of which charge a nominal fee to fill your gallons and one that is free of charge though located far outside of the city and on an unmarked pump along the side of the road. Users can upload their own springs or comment on the quality, taste, and directions of others. Founder Daniel Vitalis recently opened up about his grassroots passion, noting that “the water infrastructure for the country is exceptionally old and it is breaking down.” The ongoing struggle in Flint, Michigan, is one such example.

The easiest way to get started is to simply log in to FindaSpring and input your location, or the location of a town you’re visiting. While I tend to frequent nearby springs, I’ve also visited springs near Zion, Utah, Sedona, Arizona, Crater Lake, Oregon, and Vancouver, British Columbia – though the range of springs is, of course, worldwide. Once you’ve found a spring, bring along whatever containers you have. I like purchasing five or ten-gallon glass jars, but in a pinch I’ve also used a variety of metal and glass water bottles to store the water. While the directions are posted for most springs, it’s useful to scroll through the comments as users often update or clarify any vague directions. Most springs are located directly off of a highway, which means that you’ll be pulling over between mile markers. Ensure you exercise caution here!

While spring water is almost always cleaner, fresher, and tastier than its tap and bottled counterparts, there are instances in which people have gotten sick. To be extra prudent, you can test the water for particles yourself.