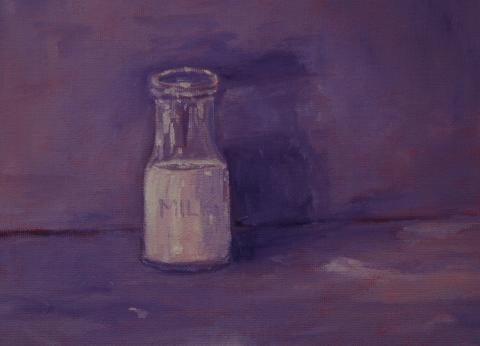 There are many out there who are of the opinion that humans are not meant – nor were ever meant – to consume cow milk. I understand this logic, I do, and also believe that there is not not a correlation between the fact that I’ve never broken a bone and the many years of my childhood spent drinking milk. I have grown, however, to believe strongly that everything in moderation (even moderation) is optimal when it comes to diet. To each their own, ultimately, but today we’ll talk about all the alternatives to cow milk.

There are so many milks out there these days, it’s amazing! There is one small detail about milk that I feel merits some discussion, though. “Milk” comes from mammals, from the breast of a living being. Nuts, grains, or legumes do not produce “milk” by this definition, and so I struggle with the term being used to describe various alternative milky, opaque drinks. I very much appreciate that some establishments choose to use the term “mylk” as a reminder that it is plant-based/non-dairy, or not from the udder. Either way you like your milk/mylk, consider the various benefits and cautions of your preferred creamy mustache.

Goat milk actually shares more in common with human breast milk than cow milk does. This makes goat milk easier to digest and less likely than cow milk to cause inflammation; goat milk also contains fat particles that are one-ninth the size of those contained in cow milk. In addition to being an anti-mucosal, goat milk is very nutrient dense, with one cup providing 35% of one’s recommended daily intake of calcium and 20% of that of riboflavin. It is also a good source of phosphorous, protein, potassium, selenium, and vitamin B-12. Most people who are intolerant to cow milk find it easier to digest raw goat milk.

Sheep milk contains comparatively more protein than both cow and goat milk, making it ideal for tissue and bone growth in the body. Sheep milk contains the essential minerals zinc, magnesium, and calcium, in addition to vitamins A and E, which boost the immune system, and B vitamins such as folate, which are necessary for female reproductive health. Although the high percentage of fat in sheep milk is primarily monounsaturated fats, which can help to lower one’s cholesterol, it is the most calorically dense of the milks.

Buffalo milk, similarly, is also calorically dense and high in fats, but contains less cholesterol than cow milk. Buffalo milk boasts more calcium than cow, goat, and sheep milk, contains more phosphorus, and is also rich in vitamin A, iron, potassium, and magnesium. High peroxidase content in buffalo milk also keeps it preserved for longer than cow milk. As both buffalo and sheep milk are high in beneficial fats/cholesterol, doctors may recommend it to those managing obesity, kidney diseases, diabetes, or hypertension. Always consult your doctor first before self-medicating; buffalo and sheep milk are also calorically dense, making them optimal for weight gain.

Soy "milk" is pressed from the soybean, which is a legume native to Southeast Asia. Soymilk – free of cholesterol and low in saturated fat – is a popular replacement for vegetarians, vegans, and those who are lactose-intolerant because of its high protein, energy, sugar, dietary fiber, and fat contents. Soymilk may contain a slew of vitamins, including calcium, iron, magnesium, phosphorus, potassium, sodium and zinc, and minerals such as folate, thiamin, riboflavin, niacin, and vitamins B6, B-12, D, E and K. Generally, soymilks are fortified (always read the label!) to contain necessary nutrients and improve shelf life, and due to soy’s popularity, most soy products are derived from genetically modified plants. Research shows that prolonged consumption of soymilk can lead to fertility problems and difficulty for those with thyroid conditions.

Coconut “milk” is made from the cream of the coconut, which is produced by grating the flesh of the tropical fruit. (Yes, those with “nut” allergies should be able to consume coconut milk.) Like soymilk and other plant-based beverages, coconut milk can also be fortified with added nutrients that it does not naturally contain – like calcium and vitamins A and D – and ingredients that thicken and extend shelf life. Coconut milk is the most fatty of the plant-based milks, with most of the fats being saturated medium-chain triglycerides, which are believed to aid in weight loss. Coconut milk beverages, not to be confused with the type for cooking which comes in a can, are not a good source of protein.

Almond “milk” is pressed from ground almond meal, and is naturally free of saturated fats and lactose and a good source of vitamins A and E and fiber. (Clearly, those with nut allergies should avoid almond milk or other nut milks.) Like coconut milk, almond milk is also not a good source of protein or calcium, despite whole almonds being a good source of protein. Almond milk can be fortified with calcium and vitamin D, and, if unsweetened, have fewer calories and a lower glycemic index than other milk beverages out there. For additional consideration: As production of one almond requires about one gallon of water, some argue that almond products are not sustainable.

Rice “milk” is made from milled rice, and is a common choice for those with lactose, soy, or nut intolerance. Rice milk contains no saturated fat or cholesterol, and is a good source of most B vitamins, magnesium, iron, and copper. It is not, however, a good source of protein or calcium, though calcium and other nutrients are often fortified in rice milk. Rice milk contains the powerful antioxidants manganese and selenium, which are effective in fighting infection and boosting the immune system. Rice milk is, like rice, very starchy, and therefore packed with carbohydrates; it is therefore not ideal for diabetics or weight loss.

Oat “milk” is made by soaking hulled oat groat grains, and is lactose free and low in fat. Oat milk contains twice as much of the recommended daily value of vitamin A and proportionately more calcium than cow milk. It is also a great source of iron, fiber, manganese, potassium, phosphorus, many B vitamins and vitamins E and A. Oat milk also contains phytochemicals, antioxidants, which help to prevent heart disease, stroke, and some cancers. Again, oak milk found on the shelf is often fortified with nutrients and other stabilizing ingredients. Making your own oat milk at home is easy, though!