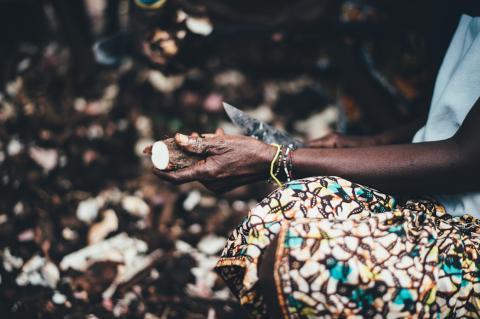 Cassava, manioc, yuca, manihot, tapioca…maybe you’ve seen this long, dense tuber in the [exotic] produce section of your local market. The staple starch goes by the scientific name Manihot esculenta, but its common name differs depending on the region. Native to South America, Africa and parts of Asia, cassava has been a staple carbohydrate in the diets of those living in such sun-drenched, tropical regions. In the U.S., we most commonly find cassava or manioc in the form of tapioca balls, which are made from the pulp of the starchy tuber.

The edible root can grow up to two feet in length and weigh anywhere from one pound to several. The outside skin is a brownish-gray, tough, and woody in texture. The interior white “meat” – which can be either sweet or slightly bitter, depending on the cultivar type – is rich in starch and higher in protein than other staple tropical tubers like yam, potato, and plantain. Cassava is more calorically dense compared to other tubers, as sucrose makes up approximately 69% of its total complex carbohydrate content per 100g. If you’re curious about how cassava stacks up to other root vegetables, check out this site, which allows you to compare the nutritional value of two foods side by side. Cassava has nearly twice the calories and carbs as compared to sweet potato, for example. Nevertheless, naturally gluten-free cassava is rich in:

Being gluten free, cassava is a great replacement for those with celiac disease. Likewise, having a low glycemic index – meaning that the release of glucose into the bloodstream is controlled – cassava is also good for diabetics. The low glycemic index in addition to the fiber content of cassava also works in decreasing constipation, appetite and fat storage in cells.

Although cassava can be cooked more or less like a potato, cassava contains trace amounts of cyanogenic glycosides, which are toxic in raw form. Here are some important tips for properly preparing and cooking cassava:

Cassava can be steamed, baked, fried, grilled, or mashed; read about some other cooking methods here. Like the root, cassava leaves contain cyanoglucosides, but can also be eaten after cooking at least 10 minutes and discarding the cooking water afterwards. Cassava leaves are rich in fiber, antioxidants, and contain twice as much protein as the root. The leaves are also beneficial for digestive health and healthy cell regeneration. Although the leaves are difficult to find outside of cassava-growing regions, you may be able to find the root at your local market, grocery store, co-op or foreign foods store.