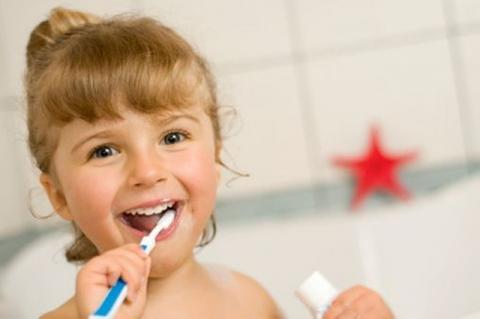 Brushing and flossing are a very important part of a regular dental hygiene routine. However, despite brushing, flossing and rinsing, cavities, gingivitis and receding gums are still very common. I experienced bleeding gums (or gingivitis) before and didn't think much of it until a visit to the dentist informed me that gingivitis can turn into periodontal disease! In other words, inflamed gums is nothing to take lightly, but luckily it's pretty easy to treat. Here are 5 herbs you can use to keep your teeth and gums in top shape!

The leaves, twigs and seeds of neem trees have been used for their antibacterial and antifungal properties for thousands of years. In ancient India, neem twigs were used as a version of an early toothbrush. Neem is also used in Ayurvedic medicine to treat skin diseases, heart disease, infections and ulcers. Neem oil is a particularly strong antibacterial agent, easily inhibiting the growth of Streptococcus mutans bacteria in the mouth, which is one of the leading causes of gum disease. It is extremely bitter and is similar to coconut oil in that it solidifies at room temperature. But running the tincture under hot water will melt the oil and make it effective for use. Simply rub oil onto gums, focusing on where the tooth and gum meet. Leave for a few minutes then rinse off with water. You could also add a few drops to toothpaste or mouthwash for a cavity-fighting boost.

There's a good reason cinnamon oil is used in so many dental products: it's not just for that sweet, hot cinnamon flavor. Cinnamon oil contains antibacterial properties that protect the tooth's enamel and keep harmful bacteria at bay. A study proved cinnamon oil to be effective against ten different species of oral bacteria including Streptococcus mutans and Lactobacillus plantarum. Be sure to purchase food grade cinnamon oil as regular cinnamon essential oil can be irritating or cause a negative internal reaction. Add a few drops of cinnamon oil to your toothbrush or add a few drops into water and use as a mouth rinse.

Peppermint oil is a popular go-to when it comes to oral health – there's peppermint-flavored toothpaste, mouthwash, even floss! So there's no surprise to find out that peppermint essential oil is super effective against gum disease, cavities and gingivitis. The active ingredient in peppermint oil is menthol, which is famously known as a powerful antimicrobial agent particularly effective against anaerobic strains found in the mouth. Peppermint oil can be a little strong for some – if you experience a reaction try spearmint oil, it's known to be safer for use and tastes milder than peppermint. Peppermint oil can be found in most natural toothpastes, and you can add a few drops to a toothbrush or combine water and oil to make a homemade mouthwash.

Myrrh is the sap-like substance that comes from the Commiphora myrrha tree, native to Africa and the Middle East. Myrrh is known to be an ancient substance – used thousands of years ago as a spice – in healing therapies and religious ceremonies. There are two main compounds found in myrrh: terpenoids and sesquiterpenes which have anti-inflammatory and antioxidant properties. Because of its anti-inflammatory effects, myrrh oil can be used to treat gum inflammation, gingivitis and mouth ulcers. It also can effectively freshen your breath as it is used in most toothpastes and mouthwashes.

Myrrh is slightly sweet, smoky and a little bitter with a light orange color. The taste can be bitter, so be sparing when using in the mouth. Add a few drops to your toothbrush or combine with peppermint oil for a fresher taste!

It should be no surprise that tea tree oil is great for oral health because it is so amazing at fighting infection and keeping harmful bacteria under control. Tea tree oil is particularly good if you have receding gums, a precursor to periodontal disease. A study has noted that tea tree oil has antibacterial compounds (terpenoids) that can eradicate even the most antibiotic resistant bacteria, making it the best choice for serious cases of gum disease/periodontal disease. Tea tree oil can cause allergic reactions, so be sure to purchase a good quality oil and test on skin before using in the mouth. Many natural toothpastes use tea tree oil in their formulas, as well as natural mouthwashes and floss. You can add a few drops onto your toothbrush or combine a few drops into water and use as a rinse. For receding gums, rub a few drops into gums and massage into teeth.

ALL ARTICLES BY Jaclyn Enchin