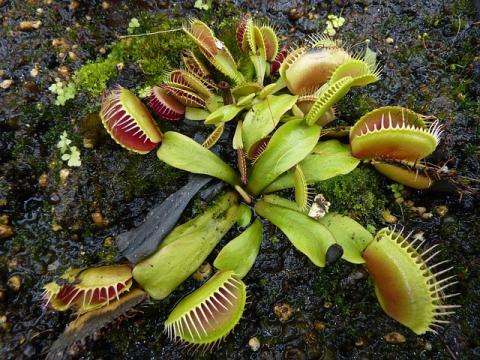 HAPPY HALLOWEEN, Everyone! I know this series covers medicinal plants and all healing things provided by Mother Nature but this week’s article will be a little more on the creepy side.

There are millions of plants across the planet but today I bring to you 5 Creepy Plants Possessing Healing Properties. Some of these plants are beautiful and it’s the seed pod that looks scary, or maybe it’s a scary story behind the plant itself.

Rafflesia arnoldi AKA The Corpse Flower – Yes…. that’s right, the name says it all. Don’t get me wrong, the plant is beautiful and amazingly large, but it produces a putrid smell similar to rotting flesh and meat. The corpse flower is said to display parasitic behavior -- could this be a Zombie plant? There is a second plant that is also called the Corpse Flower and that is the Amorphophallus titanum. This flowering plant is also large in a different way -- it is tall as well as wide, and it also puts out a foul smell.

Both plants contain their own medicines. It's been said that the Rafflesia is used in traditional medicine to help with childbirth and after care, and it is also considered to be an aphrodisiac. The Amorphophallus konjac, a species of the Amorphophallus titanum family, has been used for many years in Ancient Chinese Traditional Medicine to lower cholesterol and for detoxification.

Photo Credit: "Corpse flower at Eden" by Barry is licensed under CC BY 2.0

Chinese Fleece Flower Root – The flower of this plant isn’t very creepy – it’s the root that may scare some people! Think about digging up roots and coming across what looks like little earth people with flowing hair.

The Fleece Flower Root is used medicinally as a mild laxative, an astringent, and a cardiac tonic, just to name a few. This medicine is popular in Ayurvedic healing and therapy.

Bleeding Tooth Fungus – That’s right, this mushroom looks a lot like a bleeding tooth. Some people think it looks more like a bleeding brain. The cool thing about it is after you are done using it as a Halloween decoration in your haunted house it can then be used to make medicine. A funny thing about the Bleeding Tooth Fungus looking like a brain is that Medical Evidence shows it has an effect on the brain’s memory and learning. This mushroom also contains anticoagulant properties. So all together this creepy looking plant simply defines its purpose through its physical appearance.

Photo Credit: "Strawberries and Cream" by San is licensed under CC BY 2.0

Snapdragon’s Seed Pods – I know it may sound strange seeing how a Snapdragon is a beautiful flower, so how is the seed pod creepy? Well if you search the Internet for the seed pods you will notice that they look just like little tiny skulls. The flowers bloom beautiful shades of reds, purples, and white. It just so happens that the whole entire plant is used medicinally. The plant can be used as a bitter, for blood circulation, for detoxification, and to ease swelling.

Photo Credit: "Snap Dragon Seed Pod" by Collection of Image from Web is licensed under CC BY 2.0

Hydnora africana – Although this little plant looks like it can literally bite your ankles, studies show this plant is pretty important in the medicinal world. It contains antibacterial, anti-allergic, and anti-inflammatory properties, along with many other healing benefits. This plant is similar to the Corpse Flower as it displays parasitic properties, and it also puts out a foul odor (but not of rotting things it is more like excrement). It is an actual root parasite that grows and takes over another plant’s life. Zombie plants do exist, my friends!

Photo Credit: "Hydnora africana" by Lotus-Salvinia.de is licensed under CC BY 2.0

Medicine is found in all sorts of places on Earth,  and it just goes to show that even creepy looking and stinky plants have a purpose in this world.

Mother Nature is amazing, even if it gets a little creepy at times. From our Mother Earth sprouts OUR life force and medicine, and it is within her waters we can drink and become pure in many ways. I hope you have enjoyed this Halloween Special and all of its creepy counterparts.