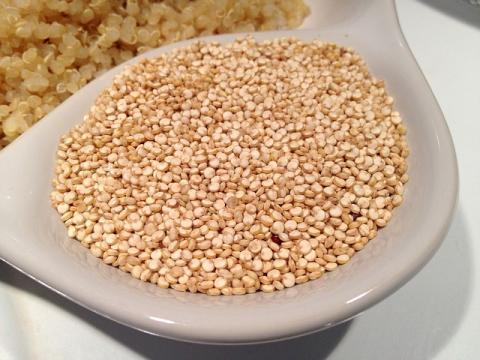 Quinoa, pronounced “keen-wah”, originated in the area of Chile and Peru and flourishes in altitudes from 12,000 to 15,000 feet. It is a fruit of the family Chenopodium and is an annual herb with seeds growing in clusters at the top of the stalk, much like millet. The native peoples used the seeds for cereal, in cakes and brewed into a beer; the leaves were eaten much like spinach. It was the second most cultivated crop in the native cultures and highly valued for its protein and high nutritional content.

Today the plant is cultivated in the high peaks of the Rocky Mountains of Colorado. It has proven to be so rich in nutrients that NASA has been considering it as a food to be grown in outer space. It is one of the few plants that contain all nine essential amino acids making it a source for complete proteins. It a good source of vitamins, minerals and many trace minerals, making it a healthy addition to any menu. It is rich in flavonoids that include quercetin and kaempferol with a high content of quercetin, making it an anti-inflammatory, anti-viral, anti-cancer and anti-depressant.

Though there are no conclusive studies, quinoa is considered ideal as a weight loss food. It is high in fiber, has a low glycemic index and is rich in protein. This makes it a food that is filling and increases metabolism. It is a tasty addition to any diet made in a variety of dishes.

Quinoa can be prepared and used much like couscous and used in dishes like tabbouleh salads, pilafs and as a stuffing for peppers or cabbage and is a good substitute for wild rice. It is advised to soak the seeds before cooking to remove some of the phytic acid, making it easier for the body to absorb the nutrients, then thoroughly rinsed to remove the natural coating called saponin.

Cooked briefly in water, quinoa fluffs up, tripling in size, and has a crunchy texture, much like a cross between short-grain rice and bulgur. One cup of dry quinoa yields three cups of cooked quinoa. The preparation is simple: add one cup of dry quinoa to two cups of water and then bring to a boil and simmer for approximately fifteen minutes. It is excellent as leftovers because it does not lose its texture when refrigerated.

The myriad of recipes makes quinoa a valuable addition to any pantry.