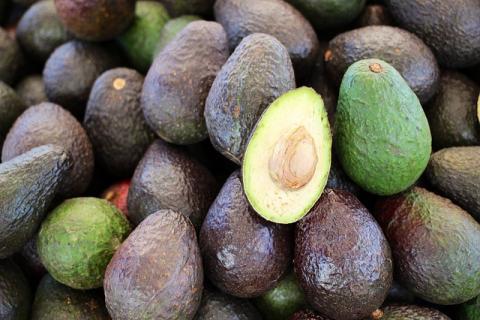 The avocado tree is a member of the laurel family and was first cultivated somewhere in Central America 7,000 years ago, making its way to Mexico some 2,000 years later. By the late 15th century it could be found as far south as Peru where it is known as “palta.” The English term avocado was derived from the Spanish translation of the Aztec name “ahuacatl” -- their nomenclature was “aguacate.” The original fruit was round in shape but as it was cultivated it became pear shaped. It is said to have arrived in the West Indies after the arrival of the Europeans in the Americas. It was brought to Florida by Henry Perrine in 1833 but was not grown commercially in the state until 1900. The fruit arrived in California in the late 19th century and did not get to Europe until after World War II.

Grown organically, it is a nutritious fruit high in protein and oils containing approximately twenty vitamins and minerals that include vitamins B, C and E along with potassium, lutein and folate. The fruit boosts the immune system, helping to protect the body from disease and infections; it aids in the control of blood pressure, is advantageous for good ocular health and helps in the repair of cells. It is a good fruit to eat during pregnancy and as a first food for babies. Because it is high in monounsaturated fat it helps to control cholesterol.

Organic avocados are known to inhibit the growth of prostate cancer, oral cancer and breast cancer. It is a heart healthy fruit that also prevents the development of blood clots that lead to strokes. It aids in digestion, and scientists have found that when foods are eaten with avocado the consumer absorbs more nutrients from the other foods. It has been shown to slow the aging process, help control weight, and reduce the risk of the development of Type 2 diabetes.

There are three main types of the fruit: the Guatemalan, Mexican and West Indian. The Florida avocado originated in Mexico and has a smooth, Kelly green skin and golden fruit. There are many kinds of avocados grown in California, the most common being the Haas, and avocados are grown in California both conventionally and organically. The Haas avocado has a dark green, bumpy skin with a light green fruit inside.

The fruit is ripe when it is pliable to the touch but not too soft. Skin color does not necessarily indicate ripe fruit. There are many avocado recipes that can enhance any meal. The native peoples would mash the fruit and combine it with tomatoes and onions; today we call it guacamole.