Your Guide To Summer Flowers: Yarrow 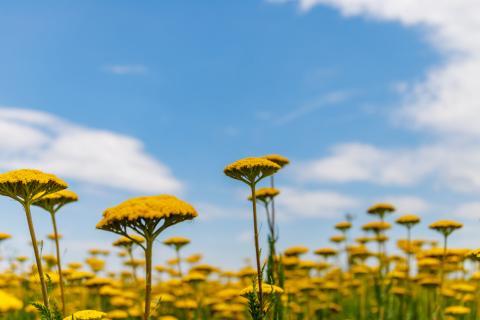 Yarrow is a member of the family Asteraceae or Aster family of the genus Achillea L. or yarrow P, containing the species Achillea millefolium L. or common yarrow P. The plant is native to the northern regions of Asia and Europe and was introduced to the Americas by the first settlers. It is a perennial flower that has several names that include nosebleed plant, old man's pepper, devil's nettle, and milfoil; in the southwestern United States it is called plumajillo meaning “little feather” because of the shape of the leaves. The species has many varieties and is a hearty plant that can be invasive. Yarrow has been used as a medicinal herb for centuries and has many healing benefits. It is closely related to chamomile and chrysanthemums and was once used as spinach—though the plant is edible it is more regarded as a healing herb than a food.

Yarrow is a perennial herb that can produce one or multiple stems which emerge from the rhizome of the plant and matures from eight to sixteen inches in height. The lance-shaped leaves are larger at the base and grow along the stem, getting smaller as they advance to the top of the plant, and they vary in size from one-and-a-quarter inch to six inches in length and one-quarter to one-and-one-quarter inch in width. The flowers are white to yellow-white in color and the plant can grow ten to twenty flowers at the top of the stem; they begin to bloom in May or June.

How To Grow Yarrow

Yarrow is a good plant for the novice gardener and for children as it needs little maintenance. The first step is to choose the right area: the plant needs full sunlight; well-draining, poor soil; and dry climate. Prepare the plot by tilling the ground twelve to fifteen inches deep and mix in two to four inches of compost. After the last frost, in the late spring or early summer, plant starters one to two feet apart; they are aggressive and need to be thinned. Apply a thin layer of compost each spring and divide the plants every three to five years. Deadhead the flowers as they fade and water if less than one inch of rain falls in a week. Be aware that though yarrow is a hearty plant, it is prone to aphids, stem rot, rust, and powdery mildew.

For centuries, people have used yarrow as a medicinal herb that heals a wide range of maladies.

Yarrow is a versatile plant that has many uses in recipes. It has a bitter, sweet flavor much like anise and is often compared to tarragon (and can be used in place of tarragon in recipes). It is heat-sensitive, losing its flavor in high temperatures. The leaves can be dried and used as a spice or fresh leaves can be incorporated in soups or stews and added to sauteed dishes at the end of the cooking cycle. The leaves and flowers add a unique flavor and texture to salads; they are used in the process of making infused vinegars and oils, and are an ingredient in liquor and bitter recipes. In the garden the plant enriches the soil and repels some harmful insects. A study revealed that wild yarrow has higher concentrations of unsaturated fatty acids, phenolic acids, organic acids, carbohydrates, and tocopherols than the cultivated plant but the commercial yarrow has a higher concentration of proteins, sugars, flavonoids, fats, and saturated fatty acids.